US Forestry Service tool quantifies the structure, function, and value of Atlanta's forests. 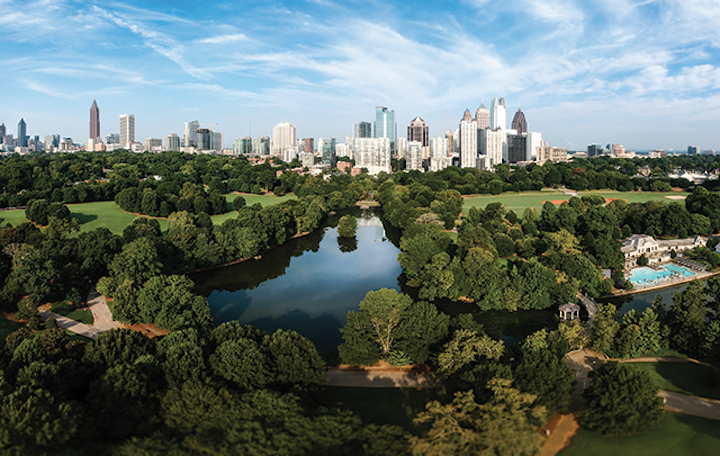 Affectionately known as “the city in a forest,” Atlanta’s tree canopy covers a little over 47% of its city limits. This forest provides Atlanta residents and its visitors with many quality-of-life benefits such as shade from the hot summer sun, pollution removal from vehicle emissions, and recreation, in addition to capturing and filtering stormwater runoff. However, a recent report from the US Forest Service shows Georgia is leading the nation in tree loss, largely in urban areas (Nowak and Greenfield 2018).

Atlanta is experiencing a period of rapid population growth. Between 2016 and 2017 it had the third-highest population gain of any metro area in the United States (US Census Bureau, 2018). The city permitted over $4 billion in construction during that time, which was more than in any other 12-month period in its history. Metro Atlanta’s population of 5.8 million is projected to grow by nearly 50% over the next two decades, and the City of Atlanta is expecting to triple its population from 465,000 to 1.2 million over that timeframe, according to an Atlanta Regional Commission forecast (Atlanta Regional Commission, 2016). With growth and development comes an increase in impervious surfaces and a loss of tree canopy cover and its associated benefits.

The good news is that citywide planning efforts are underway to protect, restore, and enhance Atlanta’s tree canopy while the City grows. The City of Atlanta’s Department of Watershed Management (DWM) is addressing the adverse stormwater-related impacts of urbanization, in part, by implementing public green infrastructure (GI) projects as a primary strategy to help control flooding and improve water quality, as well as requiring GI on commercial and single-family development. Efforts include installing engineered green infrastructure practices modeled on natural hydrologic function, such as rain gardens, green roofs, permeable pavement, and cisterns, as well as protecting and restoring healthy forests, wetlands, and riparian buffers, or “natural green infrastructure.” Guided by its Green Infrastructure Strategic Action Plan, DWM is advancing GI across city departments to strengthen the resilience of Atlanta’s watersheds and communities in the face of rapid growth and climate change. The Plan sets a goal of reducing an additional 225 million gallons of stormwater runoff annually through the use of GI, or roughly 1% of the runoff generated by the one-inch storm.

In addition to over 5,200 GI projects permitted on private residential and commercial properties and over 60 public GI assets in city rights-of-way and parks, DWM owns and manages nearly 2,000 acres of permanently protected natural areas in 12 watersheds around metro Atlanta (Figure 1). These forested greenway properties were acquired via a federal mandate to manage stormwater and mitigate runoff and erosion and, together with parkland, constitute the City’s natural GI network. To date, Atlanta’s engineered GI reduces annual runoff by over 1.1 billion gallons cumulatively, approaching the annual programmatic goal. To proactively build and expand its natural GI program, DWM needed a method to similarly quantify the value of its existing unprotected forests. DWM was able to partner with the USDA Forest Service to evaluate the benefits that Atlanta’s urban forest provides, not only pertaining to stormwater runoff but also co-benefits including energy conservation, air pollution removal, and carbon sequestration. 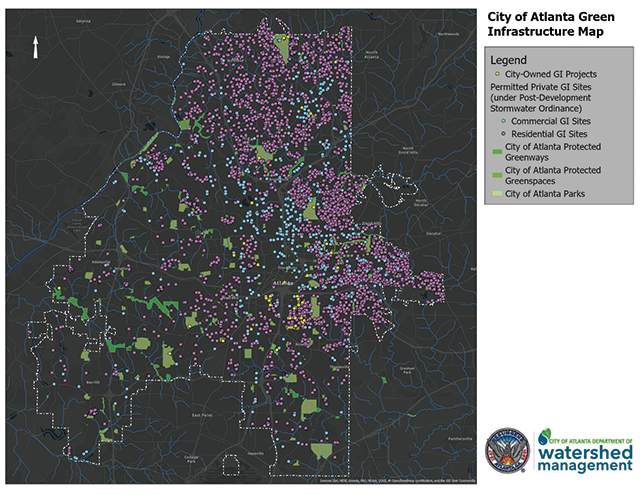 In support of other research projects, the Forest Service conducted an urban forest assessment in Atlanta between 2014 and 2015 using their Urban Forest Effects Model, i-Tree Eco. This model is designed to use field-collected data along with local hourly meteorological and air pollution data to quantify a community’s forest structure, function, and value.

Within the city limits of Atlanta, 443 randomly located 1/10-acre plots were established (Figure 2). All trees within the plot boundary greater than 3 inches in diameter at breast height were inventoried according to the i-Tree Eco data collection methodology. Trees less than 3 inches in diameter typically provide very few environmental benefits, so they were not included in the assessment. Data collected for each tree included species, diameter, crown metrics to quantify volume, crown condition, and distance/direction to any residential building within 60 feet of the tree. Most plots fell on private property and permission to access these plots was needed. As a result, because permission could not be obtained, some parts of Atlanta were underrepresented. 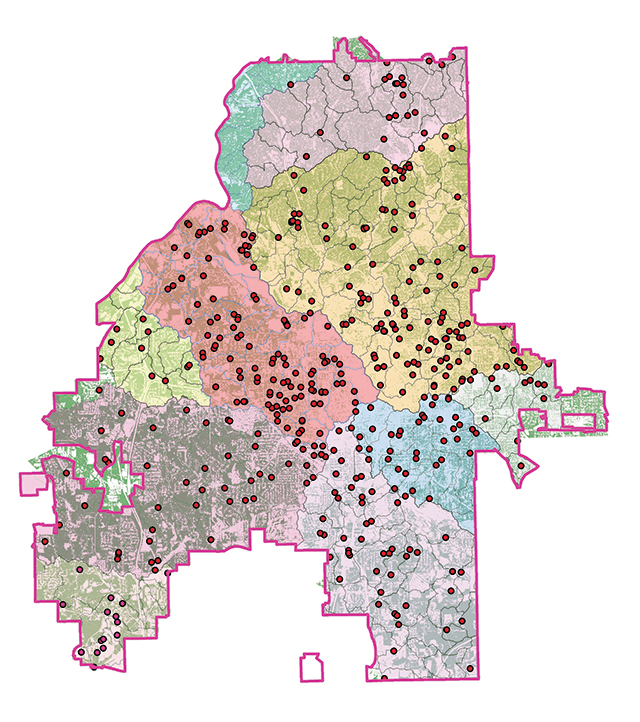 Leaf surface area drives most environmental benefits. It is on leaf surfaces that rainfall is stored or air pollutants are deposited. To model these benefits, researchers typically associate a unit of benefit (volume of rainfall retained or air pollutant deposited) with a unit of leaf area. I-Tree Eco uses these associations to calculate benefits area-wide by combining tree data collected in the field with published allometric equations for tree species to estimate leaf area. Knowing the plot area in each land-use type, i-Tree Eco can estimate leaf surface area per unit of ground area and then extrapolate that over the entire city. By using the cost of treating things like a gallon of stormwater or illnesses related to air pollution exposure, i-Tree Eco can calculate the economic value of the urban forest (Nowak et al. 2014; Hirabayashi et al. 2015).

For the City of Atlanta, i-Tree Eco estimated that 235 square miles of leaf surface area covered the 134 square mile city. This is roughly 76,400 square feet of leaf area per acre of land. I-Tree Eco calculated that there are about 3.7 million trees in the city, with roughly 43 trees per acre. The most common tree species found in Atlanta are loblolly pine (18%), sweetgum (11%), and water oak (7%). Having so many pine trees is a benefit to Atlanta for stormwater mitigation because pines typically have greater leaf surface area than deciduous trees and retain their foliage year-round, so they can retain more rainfall over the course of a year.

Collectively, Atlanta’s urban forest is estimated to remove 1,200 tons of air pollutants (ozone, NO2, SO2, PM2.5, and CO) annually, valued at $9 million in reduced incidences of adverse health effects. It stores 1.3 million tons of carbon in its wood fiber ($91 million) and sequesters 45,000 tons of carbon ($3.2 million) annually by photosynthesis. Through direct shading and by blocking winter winds, the forest provides Atlanta’s residents with $13.5 million in energy savings, which reduces the emission of 23,000 tons of carbon by the utility provider at an additional value of $1.7 million per year.

From a stormwater standpoint, i-Tree Eco uses hourly meteorological data and one-hour time steps to calculate the depth of water storage and volume of rainfall that is intercepted and held on leaves. This water is eventually evaporated back into the atmosphere and does not become runoff. From the data, Atlanta’s urban forest retains up to 32 million gallons of rainfall every time it rains. This amounts to one seventh of Atlanta’s Green Infrastructure Strategic Action Plan’s annual runoff reduction goal.

Using the tree data collected in 2014–2015, the Forest Service was able to compare stormwater benefits among climatically different years ranging from dry to wet. Meteorological data from 2007 (a dry year), 2010 (an average rainfall year), and 2013 (a wet year) were run through i-Tree Eco. Compared to the depth of rain that fell on Atlanta in each of these years, i-Tree Eco calculated that leaf area intercepted 2 to 3 billion gallons (2–3%) of the total rainfall, and transpiration from the trees reduced runoff by an additional 10 to 12 billion gallons (6–15%) (Table 1). Through transpiration, water is removed from the soil profile and thus provides more pore space to hold water between rain events. The model assumes that there is adequate soil moisture throughout the year to sustain transpiration; however, during the growing season in the South, soil moisture is typically limited so these numbers may be overestimated, especially for the dry year (2007). Even so, just looking at the benefits that leaf area provides by retaining rainfall (2–3 billion gallons), the GI Strategic Action Plan goal is exceeded by ten-fold annually.

DWM has completed 10 Watershed Improvement Plans (WIPs) to study and understand the condition of each of the City’s watersheds and develop projects that target water quality improvements and watershed health. WIPs identify potential engineered stormwater and GI projects, model cumulative benefits of projects at the watershed level, and score projects individually based on triple bottom line (environmental, social, and economic) criteria. DWM recently developed a Preservation Evaluation Tool to assess and compare the relative water quality impact of acquiring individual parcels. DWM could now apply the i-Tree Eco model at the watershed scale to calculate the collective value the natural GI is contributing.

Segregating the Forest Service data set by watershed, the team was able to run i-Tree Eco assessments for each of the watersheds in Atlanta. The 12,100-acre Proctor Creek watershed is the only watershed entirely within the Atlanta city limits and is designated as one of 19 Urban Waters Federal Partnership locations (www.epa.gov/urbanwaterspartners). Proctor Creek originates in highly impervious downtown Atlanta and flows west to the Chattahoochee River, passing through some of the most economically depressed neighborhoods in the city. The watershed has a 38% tree canopy cover.

Using data from 110 plots, i-Tree Eco estimated that the Proctor Creek Watershed had 78,000 square feet of leaf area per acre and about 33 trees per acre. The most predominant tree species were water oak (14%), sweetgum (14%), and loblolly pine (9%). The trees retained almost 500 million gallons of rainfall and transpired almost 900 million gallons of water out of the soil in 2013. The runoff reduction goal calculated within the Proctor Creek Watershed, relative to the GI Strategic Action Plan goal of 225 million gallons per year for the entire city, is 43 million gallons annually. WIP modeling found that 32 GI projects would need to be implemented at about $12 million to reach this goal. In addition, these trees removed 133 tons of air pollution (mostly ozone), saving Atlanta almost $3 million in related healthcare costs. The residents of Proctor Creek saved $2.5 million in energy costs. These numbers represent the value of maintaining and managing the trees in the Proctor Creek Watershed, or conversely the cost of losing them in an area that is under increasing development pressure.

DWM was also interested in the value of the City’s publicly owned and protected forestland. The City of Atlanta owns and maintains 1,920 acres of greenways, which are intact remnant forests, and 1,315 acres of naturally forested preserves as City Parks. Using data from forested plots in Atlanta, i-Tree Eco was able to estimate stormwater benefits of preserved, undeveloped forest cover (versus scattered trees on residential or commercial land) on a per-acre basis. With that, DWM calculated that their greenways intercepted 151 million gallons of rainfall and transpired 304 million gallons annually, while the naturally forested parks intercepted 104 million gallons of rain and transpired 208 million gallons of water from the soil per year. These numbers help DWM track the benefits of new acquisitions and justify preserving existing forested tracts of land as part of its natural GI network.

A city’s urban forest provides substantial environmental, social, and economic benefits. Specifically, it can deliver quantifiable stormwater benefits by reducing runoff volume through rainfall interception and transpiring water out of the soil. Although not reliably quantifiable at this time, tree canopy cover also acts as a volume control measure that delays runoff and reduces rainfall intensity to increase the infiltrative capacity of stormwater runoff into the soil, which can maximize the efficiency of engineered GI systems. Using an assessment tool like i-Tree Eco, Atlanta can quantify the value of its natural resources and demonstrate the benefits versus costs of acquiring and preserving city-owned forests to help manage stormwater runoff more strategically and economically.