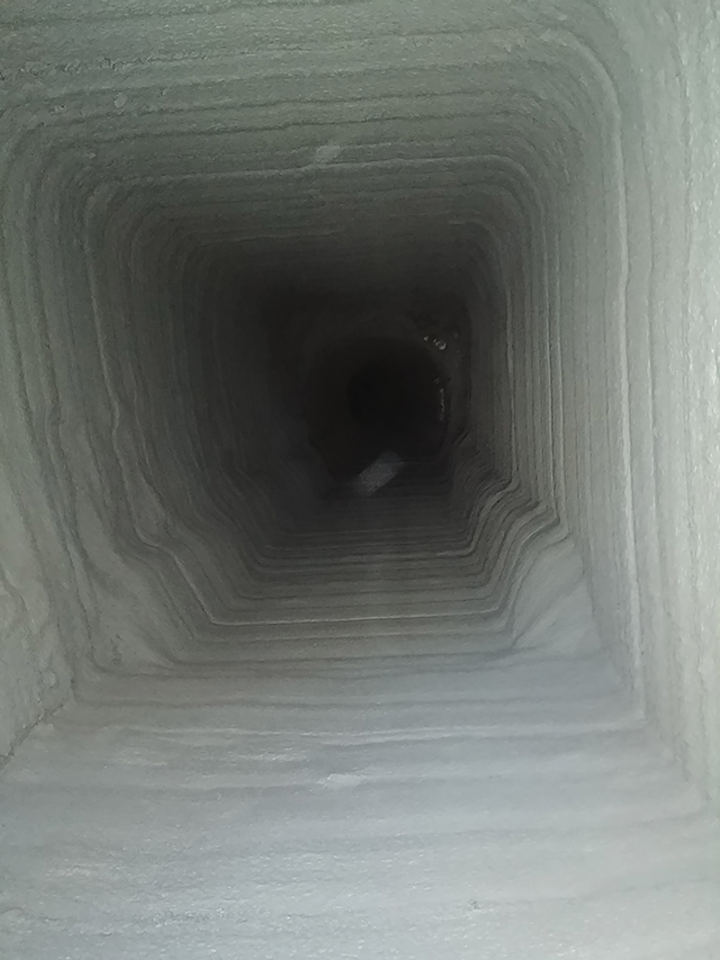 Founded in 1868, Atlantic, IA, is a small (population 7,100), classically picturesque Midwest town about halfway between Des Moines and Omaha. Local legend says that since the town’s founders estimated they were about halfway between the Pacific and Atlantic Oceans, they flipped a coin when naming the town, and Atlantic won. As it turns out, the coin was correct; Atlantic is much closer to its eponymous ocean.

Atlantic is built more or less directly over Bull Creek, obscuring it so completely that the waterway no longer appears on maps. Bull Creek is now channeled through long sections of, variously, very old 5.5-by-5-foot arched limestone block and mortar, arched 5.5-by-6-foot box culvert, and 5.5-foot round RCP. These large-diameter underground assets also happen to be failing rather dramatically, with significant spalling, loose limestone blocks, collapsing ceilings, exposed steel, and broken joints. Significant concrete blockages from past rehabilitations compounded the problem since the large tunnel structures often run at full capacity during storm events. “There was no real emergency,” explains project engineer David Sturm, PE and PLS, of Iowa’s Snyder & Associates. “We’ve been keeping an eye on it for ten to 12 years, have done some previous rehabilitation work on some sections, and have been preparing to do proactive rehabilitation on the worst parts.”

Still, it was time to pay attention to Bull Creek Tunnel. In 2018 Atlantic sought bids to “spray and seal specified surfaces of storm sewer box culvert with 3-inch thick MS-10,000 corrosion-resistant mortar or approved equal with carbon fiber mesh” along with debris cleaning, concrete blockage removal, repair and patching, and diversion of all stormwater during the rehabilitation to “provide a dry workplace and allow for adequate cure time,” according to the bid document. Significantly, contractors were required to “maintain access to local residents at all times. No streets are to be closed during construction.”

“I Have Full Faith”

Trench and replace was never considered for Bull Creek Tunnel rehabilitation, despite the obviously failing tunnel walls and ceilings, simply because trenching was in no way a viable option. “The entire creek is covered over with businesses and large and small buildings, and major roadways,” explains Sturm. “Trenching was basically impossible.”

At the same time, many trenchless techniques, including CIPP or sliplining, were also more or less impossible because of the necessary hydraulic reduction caused when forcing round solutions into box-shaped challenges. Sturm adds, “The Bull Creek Tunnel fills up to capacity during most storm events, and we often see outflows. Significant reduction in flow capacity has to be avoided.” In fact, ideally, tunnel rehabilitation would increase hydraulic capacity, as difficult as that seems.

Enter spray casting and eventually, as we will see, centrifugally cast concrete pipe (CCCP), a process that uses a spin-caster to spray thin and precisely calculated layers of fine aggregate composite concretes (FACC) onto the interior surfaces of underground structures. When skillfully employed, CCCP casts new, structurally sound pipe or culvert within the existing structure. Since the new pipe is thin and adheres tightly to original surfaces, pipe volume is only minimally affected. And since the new pipe is smoothly finished concrete, actual flow capacity is sometimes increased, compared to rough surfaces like brick, CMP, or limestone blocks, because the structure’s Manning’s N coefficient (a measure of friction affecting flow) is dramatically improved.

Atlantic had used spray cast FACCs on previous tunnel work and had been impressed with the results. For the 2018 project, they wanted to return to the basic idea of new concrete lining but also wanted to leave the door open for a particular CCCP process called CentriPipe. “We’d heard about it, looked into it, and wanted to try it here,” says Sturm simply.

The CentriPipe process, developed by Iowa-based AP/M Permaform, combines a high-tech spin-caster, precise pumping, and advanced FACCs to cast a new, thin structure inside of original structures. It’s a well-tested and proven solution used by most state DOTs and large municipalities as a cost-effective rehabilitation technology for large diameter sewers and culverts. Notably, the particular FACC used in the CentriPipe system (PL-8,000) incorporates precisely graded quartz sands, non-metallic fibers, and other complex admixtures to achieve a unique blend of strength and other desirable properties for underground structures. In other words, PL-8,000 applied by spin-caster already incorporates, in its very substance, the equivalent of the “carbon fiber mesh” called for in the Bull Creek Tunnel Improvements project specifications.

Both the city of Atlantic and Engineering & Construction Innovations Inc. (ECI), the winning contractor, saw this as an opportunity to institute an interesting change order; by substituting CentriPipe spin-casting and PL-8,000 for the spray-casted MS-10,000 (also an AP/M Permaform product) and carbon mesh, project costs could be lowered to within the city budget limits. This engineered solution resulted in a best-fit scenario for the city, engineer, and contractor. 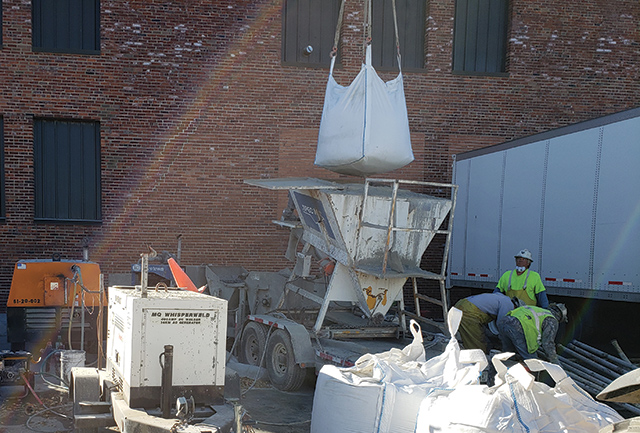 Round Solution, Square Culverts
The change order, though, did present one potential challenge; spin-casting, as the name suggests, is optimized for round pipe—but the majority of rehabilitated linear feet (1,840 linear feet total) in the Bull Creek tunnel project consists of rectangular culvert. Put simply, would this round solution work in a square hole?

Not a problem at all, according to ECI Vice President Robb Johnson. “We’re used to using the spin-caster in box culverts and have worked out good techniques for getting even coverage with the CentriPipe system,” he explains. “Basically, after cleaning and spot repairing as needed for substrate stability, we spray-cast chamfers in the top and bottom corners of the culverts to round them out just a bit, then spin-cast as usual. We monitor layer thickness carefully to be sure we’re getting the minimum thicknesses engineered for particular projects, and that’s never been a problem—layers go on evenly and predictably, without excessively thin or thick areas. That method worked very well in the Bull Creek tunnels, given there were three different cross-sections along the rehabilitation alignment.”

In fact, the whole project went smoothly despite the poor condition of the tunnels, and the dewatering and access challenges. Dewatering was accomplished by setting up a temporary bulkhead and pumping water into an available parallel system. “We did the work at a good time of year, and pumping was mostly successful,” explains Johnson. “We did experience one mid-project storm event that gave us a week break, but it wasn’t a problem. PL-8,000 cures quickly, so putting the tunnels back in service on short notice didn’t cause any damage.”

Access was also straightforward. Relative to CIPP or slip lining, staging areas for CCCP are modest, and Atlantic’s public works department provided alleyways and parking areas that served the purpose without traffic disruption. AP/M Permaform’s just-in-time delivery of FACC bags to Atlantic, for onsite mixing by ECI, was also helpful when minimizing site impacts because large amounts of material did not have to be stored onsite. In fact, traffic closures and business disruptions were completely avoided during the entire six weeks that ECI was onsite.

Cleaning and repairing the tunnels, and removing concrete blockages, was one of those contracting tasks that are simple in concept, but tedious and arduous to accomplish. But jackhammering, spray washing, spray-casted PL-8,000, and hand troweling over a week or two eventually brought the tunnel substrate to a stable, unobstructed, and smooth-walled condition suitable for CCCP. “PL-8,000 is fiber-reinforced, and will prevent or slow down the spalling process, especially with the removal of all loose or delaminating structure,” says Johnson.

With that accomplished, actual spin-casting was performed in several “pulls”—the spin-caster is winched through tunnel sections at precisely calibrated speeds—ultimately applying an even one-inch layer (per the specifications of a third-party engineer) of high-strength FACC to the inner surface of the entire tunnel interior. Quality assurance is primarily a matter of monitoring layer thickness as applied with ordinary depth gauges, material quantity monitoring, and full-time onsite inspection by city staff.

In its first use in Atlantic, CCCP was judged to be a success. “It’s a new product, and of course we’ll be monitoring it closely over the next 15 to 20 years,” says Sturm. “But given our previous experience with spray casting, and with the excellent work deblocking and stabilizing the original structure, we anticipate getting a full useful life out of this rehabilitation, without any reduction of flow capacity.”