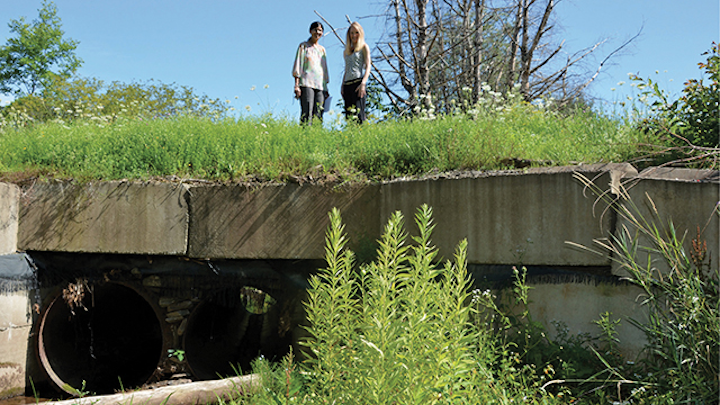 This 2016 photo shows the old culvert, which had two circular pipes with a total diameter of 36 inches. Pictured are Rifat Salim (left) and JoAnne Castagna.
Graydon Dutcher

A team of engineers is gathered on a long, empty country road in the Town of Harpersfield, NY. All that’s heard is the steady drum of rain on their umbrellas.

They’re looking over a new culvert—a large pipe—they constructed that runs under Odell Lake Road and transports Lake Brook from one side of the road to the other.

The rain, which has been going on for days, is a nuisance, but it’s welcomed by the team from the US Army Corps of Engineers because it’s proving that the culvert is successfully performing its job. Weeks earlier, the road would have been flooded because the previous culvert was damaged.

But the success of this project has much bigger implications. By controlling flooding, the culvert is also improving the water quality of the brook for aquatic life and New York City's water supply.

After Lake Brook travels through the culvert, it eventually flows into the West Branch Delaware River, which eventually streams into the Cannonsville Reservoir in Delaware County.

A damaged culvert can jeopardize the quality of this water. The previous culvert was undersized and had been damaged by years of stormwater runoff. During storm events, high water from Lake Brook streamed in and overwhelmed the undersized culvert, which caused the water to overtop and flood the road.

The stormwater runoff carried contaminants from the road to the brook and other water bodies. Runoff can also damage roads and accelerate streambank erosion. This pollution can have a damaging effect on the stream’s health and the quality of the water that eventually makes its way to the water supply.

A new culvert was constructed and the streambank was restored as part of the Army Corps’ New York City Watershed Environmental Assistance Program.

The new culvert is larger, allowing a greater amount of water to flow through and reducing the chances of flooding during storm events.

He adds, “The new culvert is designed to withstand a 100-year storm event, plus 20% additional water flow.” This is a flood whose strength and water height are predicted to occur, on average, about once in 100 years.

Less flooding means a safer community. “During storm events, the old undersized culvert would plug up with woody debris, causing water to overtop the culvert and flood Odell Lake Road, making the road an unreliable access route in an emergency,” says Dutcher.

“Odell Lake Road can now provide access for people and emergency responders to Stamford and areas north in the county when the West Branch of the Delaware River and its tributaries flood the lower valleys.”

To further control stormwater runoff, the streambanks along the culvert were restored and stabilized. Rock was placed along the banks to prevent fine sediment from running into the brook. 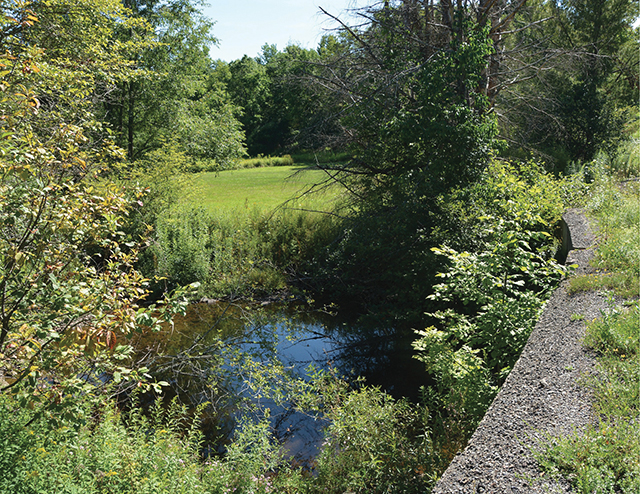 With the previous culvert, the stormwater movement over time had scoured out a pool in the bed of the brook, further increasing the flow of sediment into the brook. The rock placement is stabilizing the banks, preventing this from occurring in the future.

To provide additional stabilization, native vegetation was planted along the banks, including willows, dogwoods, and apple trees.

“Flood waters will drain from the road and filter through this vegetation before entering the brook,” notes Dutcher. The plant’s roots stabilize the soil and the vegetation traps and absorbs sediment and pollutants, such as phosphorus and nitrogen. This improves the quality of the water, helps maintain the brook’s temperature, and fosters the creation of aquatic habitats. 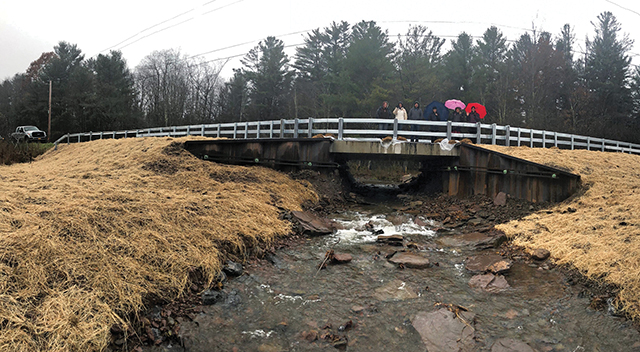 The project team looking over the new culvertGraydon Dutcher

A healthy environment for aquatic life also includes the ability to migrate and breed. Dutcher says, “The old culvert did not allow for fish passage upstream of the culvert.  The new culvert has a natural stream bottom and allows for all organisms to freely pass under the road.”

This project also addresses the future threat of climate change. “With the possibility of increasing storms events, climate resiliency knowledge like this is needed. This project serves as a great reference on how to replace undersized structures,” he says.

With the new Odell Road culvert in place, the sound of heavy rain no longer signifies the threat of flooding for the Harpersfield community. Instead, it’s a reminder that their new culvert is helping to keep their community safe, as well as improve the water quality of their brooks and streams for aquatic life and New York City’s water supply.

The land includes three watershed systems—the Catskill, Delaware, and Croton— that are located in the counties of Greene, Schoharie, Ulster, Sullivan, Westchester, Putnam, Dutchess, and Delaware.

A watershed is an area of land that catches rain and snow that drains or seeps into a marsh, stream, river, lake or groundwater. This water eventually gets stored in reservoirs, a place where water is collected and kept for use when wanted, such as to supply a city.

New York City makes sure the water is safe by treating it at the source rather than building a costly filtration plant. The source is the land that surrounds the streams, rivers, lakes, and reservoirs.

“In 1996, all of the municipalities in the New York City watershed region came to an agreement,” says Rifat Salim, project manager with the US Army Corps of Engineers. “They wanted to avoid the creation of a huge filtration plant.  Instead of a plant, they agreed to have small projects throughout the region to provide the public with clean water with minimal filtration. This is how our New York City Watershed Environmental Assistance Program came about.”