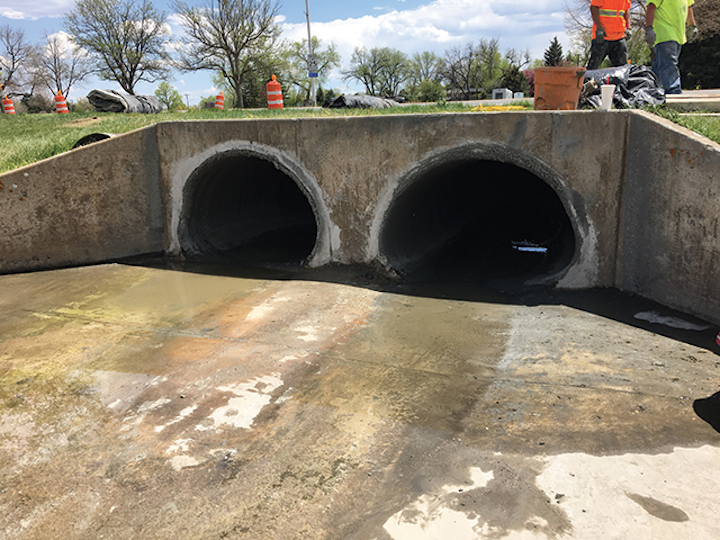 Broomfield, CO, population 60,000, is a consolidated city and county in Colorado’s Front Range metropolitan area, with Boulder to the north and Denver to the south. The unusual name is said to derive from a crop named “broomcorn,” a tall sorghum that farmers sold for use as brooms and whisk brooms.

Broomfield grew rapidly in the 1960s and ’70s, with much of the city/county’s major underground infrastructure built in that era. For planners and public works engineers in the 2000s, that means that a large percentage of the large-diameter corrugated metal pipes (CMPs) that make up most of the region’s storm system network are now nearing the end of their service life and will need replacing or major rehabilitation over the next decade or so.

Trench-and-replace, or sometimes cured-in-place-pipe (CIPP), have been the preferred rehabilitation solutions for some time in Broomfield. But in 2019, Broomfield successfully completed three large centrifugally cast concrete pipe (CCCP) rehabilitations, by contractors using the CentriPipe CCCP system, and expects to be relying on the innovative solution for many future projects. “The return on investment is excellent,” says Christian Thompson, P.E., Broomfield’s CIP Project Manager. “I’ll be the first to admit it doesn’t seem cheap when first considered, but when compared to trenching and replacing, and all the associated costs of traffic disruption, you save a significant amount of money. On these three projects alone, we saved several hundred thousand dollars.”

And it wasn’t just cost-effectiveness and zero traffic disruption that made CentriPipe attractive for the Broomfield pipe rehabilitations. According to Thompson, preserving, or even improving, flow capacity was also an important factor. “The initial two culverts we worked on were also ditches for the Farmers Reservoir and Irrigation Company (FRICO), and they were very concerned about preserving the excess flow capacity in these culverts,” he says. “And in the Midway project, which we let on an emergency basis, the affected culvert really does fill to capacity during storm events, so we couldn’t rehabilitate it with a solution that reduced flow capacity.”

But the CentriPipe system is based on a precisely controlled pump and spin-caster that casts a new concrete pipe within the old pipe; since this reduces pipe diameter, isn’t flow capacity inevitably reduced?

No, for two reasons:

Even though these three projects were the first uses of CCCP and CentriPipe in Broomfield, Thompson doesn’t really consider them a pilot project, or experimental. “This solution is new for us, but our design team had some familiarity with the concepts and based on my research I had a lot of confidence that it would meet the requirements of these projects.” Additionally, CCCP in general, and CentriPipe in particular, are well-proven technologies in Colorado, having been used by large municipalities and in dozens of large-scale culvert rehabilitations performed by the Colorado Department of Transportation (CDOT). Not only has this work established good specifications for CCCP projects, it’s also created a pool of contractors experienced with CCCP and CentriPipe rehabilitation.

One of these is American West Construction LLC, the contractor selected for the Broomfield rehabilitations.

Challenging Scenarios
Broomfield issued a request for proposals (RFP) in January 2018. But, “When this RFP was sent out, we had not yet decided how we were going to rehab these deteriorated culverts. It was during the design phase that we landed on the CentriPipe product,” says Thompson. This decision led to the issuance of “Community Ditch Culverts Restoration,” the construction documents that guided the CentriPipe rehabilitation.

This RFP described two separate projects, less than a mile apart, both carrying irrigation water most of the year for FRICO, as well as runoff during storm events:

Both rehabilitations faced several significant challenges. One was FRICO’s ownership. “FRICO has very strict requirements and standards for all things associated with their ditch,” explains Thompson. Both culverts were also failing visibly, with corroded inverts, dilapidated sections, and debris and blockage that was impeding flow. And, Thompson says, “We had a section of CMP fail approximately three months before we planned to go to construction and after the initial set of construction documents had been finalized and were under review with FRICO.” Finally, Structure No. CU005 did not run straight; this culvert featured two horizontal bends, which poses challenges when withdrawing the spin-caster sled that is so important when casting even, thin-walled new pipe.

The third project, referred to as Midway Park Culverts, was not put out for bid, as the need for rehabilitation came up suddenly while construction was underway on the first two culvert projects. “While we were under construction on the Community Ditch project, an inspection of the Midway Culverts (there are two parallel culverts running 128 linear feet under Midway Boulevard at Midway Park, 63-inch by 48-inch CMP arched cross-section) was done as part of our bi-annual inspections. The inspection report for the Midway Culverts showed that failure of these culverts was imminent, with long sections of invert completely rotted and collapsing CMP strips,” says Thompson. “Midway Boulevard is one of the busiest east/west streets in the entire city and county. Failure of one or both of the culverts under Midway, which could potentially shut down this roadway, was not an option. Given the inspection report and the recent success we were having with the Community Ditch Culverts which were under construction, the decision was made to utilize the CentriPipe lining solution at the Midway Park Culverts. We then negotiated a contract price with the contractor that was doing the work for us up at the Community Ditch Culverts. The one unique challenge we had with this project was that the Midway Culverts are within the floodway. Special attention had to be given to the design and the thickness of the lining as we were required to provide No-Rise Certification, which is a document that must be signed/sealed by a licensed professional engineer certifying that the improvements would not raise the elevation of the floodplain.”

So, a trio of tough projects for American West, but not outside their experience in Colorado, which includes longer, bigger, and more dilapidated sewers. Still, given the multitude of challenging features present in Broomfield, just how did the firm tackle and successfully complete on schedule this difficult work?

Hard Work, Difficult Conditions
For American West, work in Broomfield, at all three locations, began with heavy cleaning and debris removal and patching and stabilization of badly failing sections of CMP with PL-12,000, one of several FACC’s developed by AP/M Permaform (also the developers of the CentriPipe system) that are reinforced by graded quartz sands, fibers, and other admixtures to create a high-strength concrete product with short cure times, good thixotropy (concrete viscosity), excellent adherence to most substrates, and other properties desirable in storm and sanitary pipe rehabilitation work. PL-12,000 was also used to restore long sections of failing invert in order to create a smooth surface for spin-caster sled withdrawal.

A larger repair needed before spin-casting was the removal and replacement of a dilapidated 25-foot section of CMP. “It was just such a bad section that it couldn’t be made to work with the CentriPipe process,” explains American West Project Manager Jon Miklya. “And after replacement, it was very difficult to get the new CMP lined up with the adjacent old sections, and we couldn’t match the corrugation depth, which made the transitions in this area a bit challenging.” Nevertheless, this preparatory work was completed to everyone’s satisfaction within a week.

Dewatering was difficult on all sites, especially the Community Ditch projects, where gushing infiltration was constant due to high groundwater and a very wet Spring. “We had to pump constantly, including overnight, and apply a heat source to dry the old pipe before spin-casting,” says Miklya. “We also had to bypass pump with PVC pipe run through the old pipe, which meant we had to move the PVC between and during spin-casting runs to avoid thin strips and shadows.” The Midway Park twin culverts were a bit easier to dewater because they were parallel pipes that could be used alternately for bypass pumping.

With this heavy repair and dewatering work accomplished, actual spin-casting could begin. PL-8,000, a quick-curing FACC, was used for the spin-casting of the new pipe, as its high strength and good adhesion make it ideal for the construction of new, thin pipe in the damp conditions found in old storm and sanitary systems.

New pipe thickness and other design factors were established by a third-party engineer with experience in FACC use, and his plans were approved by both Broomfield and FRICO. The thickest pipe cast in arched sections of CMP was 1.5 inches. In round pipe, even thinner layers are often viable, but in oval and arched pipes, a little overdesign is called for to ensure minimum coverage in all sections of pipe.

Actual spin-casting at all three sites was accomplished in about a week, with each run of pipe receiving several passes casting very thin layers to build up desired thicknesses smoothly. Despite rain delays of up to a week, all work, including new concrete at transitional access areas, was completed within the three-week window provided.

Inspection and quality assurance were provided by inspectors from both Broomfield and FRICO. Some cubes were extracted for lab testing, but the main focus of CentriPipe quality assurance is to verify even casting thickness in all sections of pipe. In Broomfield, this was provided by depth gauges set at 3:00, 6:00, 9:00, and 12:00 every 10 feet or so along the pipe. “When the gauges were covered, we knew we had the right thickness of pipe,” explains Thompson. “We also tracked the quantity of material applied by tracking bags of PL-8,000 and water mixed on site—this gave us a redundant check on the pipe wall thickness.”

In the end, Thompson judged this first CentriPipe work in Broomfield to be a complete success. “I’ll admit, it wasn’t quite as pretty and smooth as I’d expected,” he says. “But that was mostly due to the very thick corrugations in this old pipe, with depths that changed from section to section—that makes a smooth finish difficult to achieve. But bottom line, this was a completely structural and cost-effective rehabilitation that left a much smoother and higher-capacity pipe than the original structure. And we had no traffic disruption at all! The city and county are very happy with this rehabilitation, and I expect that this is a solution we’ll be using quite a bit in years to come.”