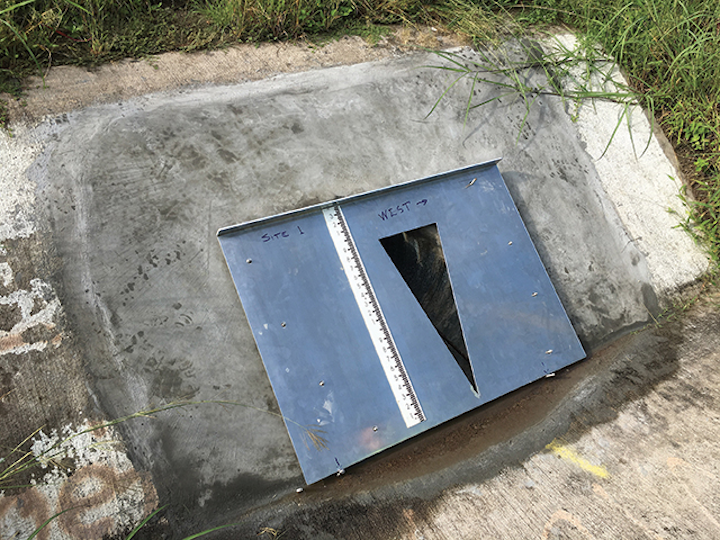 The Harris County Flood Control District (HCFCD) is a special purpose district created by the Texas Legislature in 1937 in response to devastating floods that struck the Houston region in 1929 and 1935. HCFCD’s jurisdictional boundaries are set to coincide with Harris County, a community of more than 4.5 million people (as of 2015) that includes the City of Houston. The other boundaries in which HCFCD operates are the 22 primary watersheds within Harris County’s 1,777-square-mile area.

HCFCD’s drainage and flood control infrastructure are extensive, including more than 1,500 channels and totaling 2,500 miles in length (about the distance from Los Angeles to New York). The flat terrain is made up of clay soils that do not absorb water very well, and the average annual rainfall for the area is 48 inches. 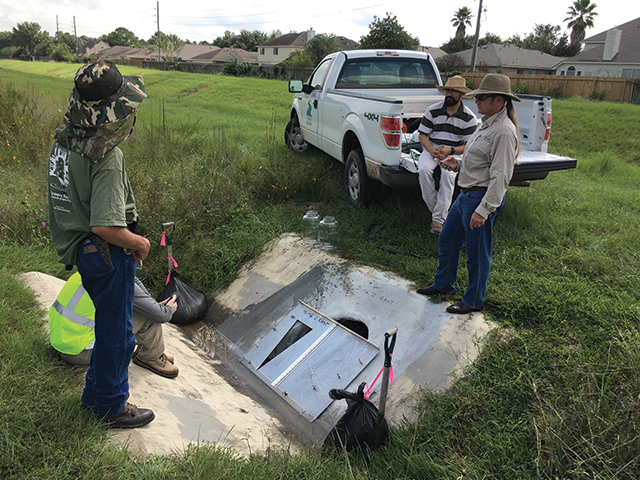 A typical design of many HCFCD channels includes a maintenance berm on top of a channel bank with backslope swale and interceptor pipes to capture sheet flow coming toward the channel. The purpose of this backslope interceptor system is to avoid scouring from stormwater runoff coming down the slope of the channel. As shown in Figure 5, the backslope swales are typically turf grass-lined and the interceptor pipes are typically 24-inch corrugated metal pipes (CMP) with a V-shape concrete structure. Under its National Pollutant Discharge Elimination System stormwater permit, HCFCD must develop and implement a storm water management program that addresses pollutant discharges from areas of new development and significant redevelopment. Stormwater best management practices (BMP) are commonly used by HCFCD to manage runoff and improve water quality.

A Pilot Project
HCFCD is studying the potential of converting a typical backslope swale into a bioswale BMP because of limited space within HCFCD’s channel right-of-way to install other types of BMPs. A BMP performance demonstration project was therefore conducted to evaluate the effectiveness and practicability of modifying a HCFCD-owned, managed, and maintained backslope drainage system into a bioswale BMP that meets Green Infrastructure (GI) criteria.

A monitoring plan and quality assurance project plan (QAPP) was developed to define requirements for conducting field sampling and data management for evaluating the effectiveness of the bioswale BMP. The purpose of the QAPP is to clearly define the quality assurance/quality control (QA/QC) requirements, management structure of the monitoring organizations, and procedures that will be followed to implement the QA/QC requirements necessary to verify and validate the data collected for the project. Lockwood, Andrews & Newnam Inc. (LAN), a national planning, engineering, and program management firm, was contracted by HCFCD to develop the QAPP, and TestAmerica, an environmental testing laboratory group, was selected to analyze the collected water samples.

Details of the layout of Site 2 can be seen in Figure 1.

Each site contains a 250-foot long swale area on each side of an inlet to backslope interceptor pipe. The time for runoff flow to reach the sampling locations was estimated to be only 1.5 minutes. Consequently, the sampling crew needed to track storm movement so they could mobilize and arrive on site prior to each storm event arriving at the sites. However, not all storm events qualified for sampling. A qualified storm event is defined as one that satisfies the following requirements: 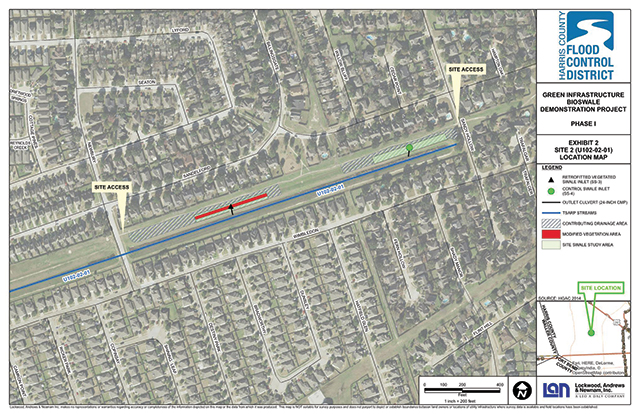 As shown in Figure 3, each selected site included two outfall CMPs or interceptor pipe inlets. The drainage area to one of the CMPs was maintained as the control or reference site while the drainage area of the other CMP was revised to a bioswale BMP. This layout allowed monitoring and comparison of runoff loading from the bioswale and control swale areas so that the results could be used to evaluate the effectiveness of the bioswale BMP.

From Swaleto Bioswale
The project then moved to the retrofitted vegetated swale phase. The vegetation changes of the existing backslope swale system at the two selected sites began in March 2018 and were completed in November 2018. The changes involved the removal of existing turf grass in the backslope swale and the planting of the bioswale with native vegetation.

The retrofitted planting has two purposes. The native vegetation selected for these areas may have more extensive root systems that are denser at the base than typical turf grass. This may allow the native vegetation to remain in place during a large storm event. It may also allow for stormwater to be filtered somewhat before it reaches the interceptor CMPs. Stormwater runoff picks up many pollutants and many of those go unfiltered when flowing through typical backslope swales before reaching the CMPs. This leads to excess pollutants and suspended solids in the receiving stream, which concentrate in downstream waterways. Figure 4 shows a fully developed bioswale BMP. 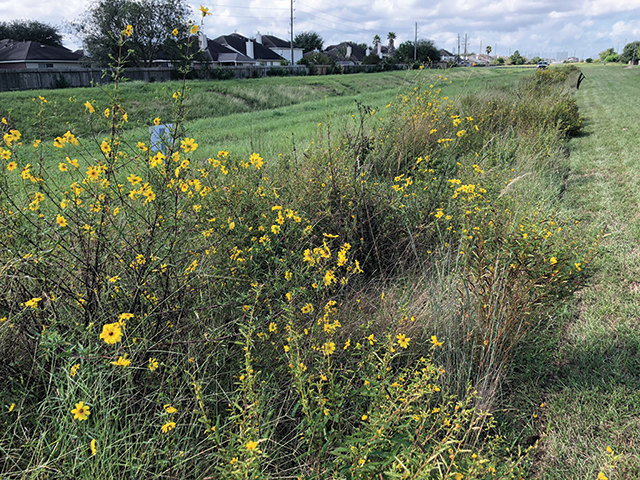 Creative FlowMeasurement
In order to calculate pollutant loads, both flow and pollutant concentration must be measured. A major challenge was determining how to measure flow that entered each CMP during a storm event. A creative flow measurement method was developed by LAN and field tested. As shown in [Figure 8], this method involved using an aluminum portable weir plate with an attached line gauge at the center of the 24-inch CMP to allow accurate measurement of water levels. This flow measurement approach was selected for its ease and because of site limitation. To properly install the weir plate, HCFCD modified the concrete headwall with mounting bolts, and the plates were then secured by using butterfly screws. The back of the weir plates were mounted with rubber seal to prevent water leaking during measurement.

Water samples were collected from the area below each V weir using a strainer attached to an ISCO 6712 Sampler. Due to uncertainty in runoff volume during each sampling event, LAN worked with HCFCD and TestAmerica on the minimum volume required and prioritized constituents for sample collection. If the storm event was small and runoff volume was limited, then sampling bottles for higher-priority pollutants were filled first. The priority of pollutants was set as follows:

Each sampling effort was executed based on the collection of minimum volume, holding time, sample preservation, and travel time from sites to lab, especially considering heavy traffic in Houston area during storm events. 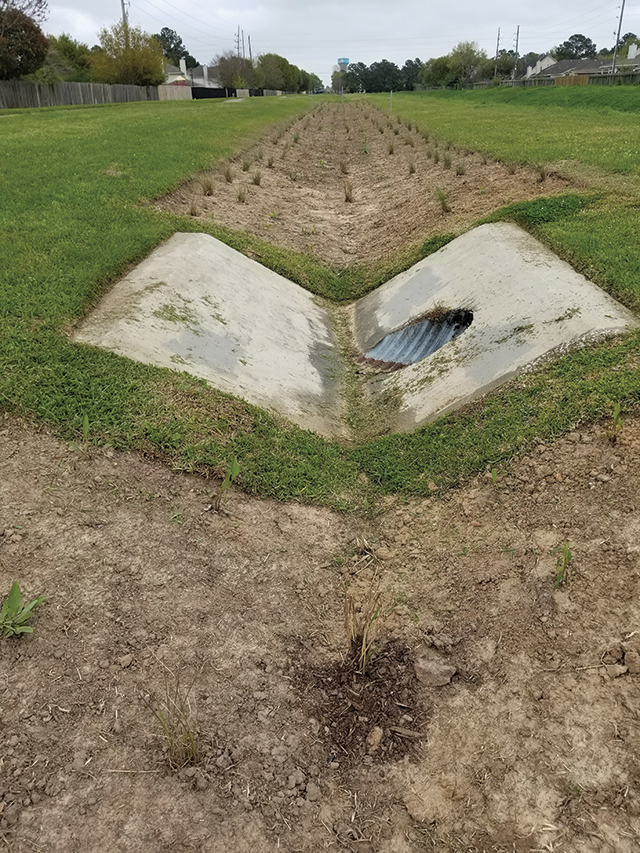 This project is the first time HCFCD has evaluated and measured the effectiveness of a bioswale BMP. The data collected and the outcome of the monitoring effort will help HCFCD decide whether a typical turf grass backslope swale can effectively be retrofitted into a native vegetation bioswale. This approach can be applied to other BMP monitoring sites with similar challenges to benefit communities that need stormwater management.