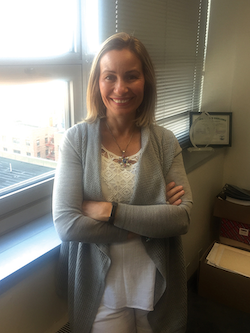 The New York City Department of Environmental Protection’s Green Infrastructure Program is one of the largest in the country. Assistant Commissioner Pinar Balci sat down with Stormwater Editor Rachel Sim to discuss how the Department incentivizes green infrastructure retrofits on private property, lessons for other communities with green infrastructure programs, and what she sees as the program’s biggest strength.

This interview has been lightly edited for clarity.

Stormwater: Commissioner Balci, New York City has one of the largest green stormwater infrastructure programs in the country. Can you give us a little bit of background on the program?
Pinar Balci: We started the green infrastructure program in 2012, and a major reason was to reduce combined sewer overflows and improve water quality in the receiving water base. But later, it became part of our consent order, which we entered into the negotiations, and we were committed to retrofit thousands of acres in New York City, where we can really provide these aggregated water quality benefits.

Most recently, although the program started as more of a source-control for the CSO program, we really expanded the program to those areas where we can have a more holistic approach under integrated planning. Currently, we submit one long-term control plan that actually tackles using the GI in our toolbox to reduce the stormwater overflows and provide stormwater load reductions and improve the water quality. It’s been a long time coming, in the last seven years, and as we learn more about green infrastructure, we realize it’s a tool that we can utilize city-wide, not necessarily just for water quality improvements, but to fight with the urban heat impact, to eliminate local flooding issues where we cannot really build sewer infrastructure, and, most importantly, to provide this green print to fight with the climate resiliency. 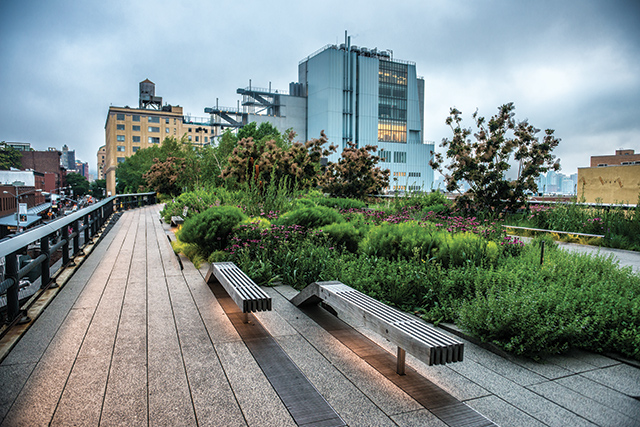 SW: What kind of incentives does the program use to try and encourage green infrastructure retrofits on private property?
PB: In the early years of the program, we had these really aggressive milestones in our consent order, so we had to tackle the low hanging fruit, which was our streets and right of way. So, we started building thousands of green infrastructure [projects] on the streets under multiple contracts.

Soon we realized that we can’t really expand this program only focusing on the public-owned infrastructure. Private became a tool in our toolbox. We realized the “one-size-fits” approach doesn’t work for private property owners. We have this very traditional grant program—private owners come to us, we evaluate their application—but it has been a very cumbersome and lengthy process because we do them one by one. We realized we can’t really catch up with everybody coming one by one.

SW: So, the $15 a square foot is new?
PB: It’s very new, it just passed as a law. There’s a lot of development going on in the city. Our development rate has really picked up, it’s around 1% city-wide. And that is indeed where we really need to target—the new development. So besides those carrot approaches, which I summarized, we are also looking to see if we can revise our stormwater regulations so we can get the most out of these redevelopment and new development projects and encourage the private property owners to do GI while it’s the cheapest. It’s easier to implement when you are building rather than coming a couple of years later and you try to retrofit and it becomes very costly.

SW: What advice would you give to other municipalities who might be looking to implement similar programs?
PB: First and foremost, when you negotiate green infrastructure, either as part of your permit or part of your consent order, make sure that you have enough flexibility. That is very important for the program, because these are distributed infrastructure and there are a lot of lessons learned over time and that adaptive management approach has to be taken into account. Give enough time for yourself to be able to bring those lessons learned and apply them to the next generation of your design or construction contract, so you don’t keep making the same mistakes. So that’s the first one.

My second pick is to focus on the construction management piece earlier rather than later. You know, we do spend a lot of time designing these distributed infrastructures and making them perfect on paper. We want to make sure that every piece of it looks perfect, get it approved. But if the contractors don’t know how to build them, or if they don’t know how those pieces really go hand in hand and work in tandem, then the program is going to fail. So, construction management is key. Even if most of us don’t have the resources that we can have enough construction managers, have enough people to inspect. My recommendation is inspect, inspect, inspect to make sure that these [infrastructure] are built according to the design drawings.

The last piece is to really look at these systems holistically, not as they come and go. Look at the full program cycle. Make partnerships with the public—public education is the key when it comes to green infrastructure. I’ve been walking a lot of those green areas that we have constructed in neighborhoods ranging from the Bronx to Queens to Brooklyn, and every neighborhood has a different take on it. Reach out to the public because we are putting this infrastructure in front of their homes—they are going to be seeing that every day that they open that door and leave the house. It is very important to ensure that the public is educated, so they become the protectors of this asset. Building these community-based partnerships is very important and it is better to start right at the start of the program rather than after you build it.

SW: What do you believe is one of the biggest strengths of New York’s Green Infrastructure Program?
PB: If I have to pick one and only one thing out of what we accomplished to date, it’s that we expanded our portfolio of green infrastructure types to fight with different local conditions. I think that is one of the challenges that we have overcome. In the early years of the program, we walked each and every street in our areas one by one—doing the geotech and the topo surveys and so on and so forth. And in the early years, we had been rejecting a lot of sites because New York is a hodgepodge when it comes to local conditions. We have high bedrock in the Bronx, we have the groundwater issues in Queens, we have the utility conflicts in some of the neighborhoods. These rain gardens that we initially designed, which we thought could largely be a good fit, we started rejecting them more and more. So, we took a step back and we said, “Okay what other designs and design adjustments can we bring so that we can site more green infrastructure?” Now we have over a dozen designs and we are proudly siting those. We have a shallow porous paver design, we have an infiltration basin design, we have different sizes of rain garden, and we can really look at the local conditions and determine which one of those different types would be a good fit. So, we are doing fewer rejections and improving our green print over time

Watch the full interview conducted with Commissioner Balci at WEFTEC 2019 on our website at www.bit.ly/2qptz4N.