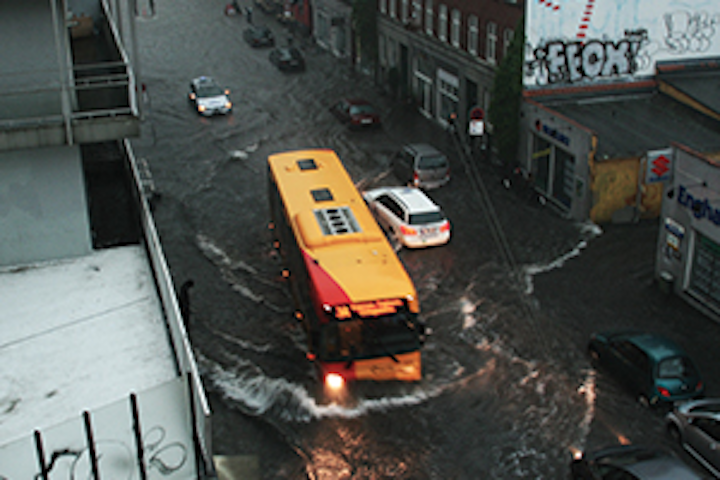 The most liveable city in 2014, according to Monocle magazine, Copenhagen (capital of Denmark) is preparing for climate change and the impact of future extreme weather. Over the next 30 years, Copenhagen will implement a new and very ambitious cloudburst master plan that will protect the whole city against 100-year rainfall events.

The world is facing many severe issues such as climate change, pollution of our waters, droughts ruining crops, and flooding of our cities causing great damage to properties. These are costing society billions of dollars, Euros, and krone in damages. This is not just a problem for European cities. Countries and cities all over the world from New York to Singapore are facing these problems. Thus, there is a great need to learn from each other through best practices and through good examples. Only by working and facing the challenges together can we succeed as societies, redefining the nature of our cities and leaving them in better shape for generations to come.

The Metropolitan Water Reclamation District of Greater Chicago is seeking a visionary Executive Director. The District is an award-winning wastewater agency which has been a leader in protecting the Chicago area water environment for over a 120 years. For information and to apply, click here or contact ExDir@mwrd.org. The District is an Equal Opportunity Employer.

In the 12-month period from August 2010 to August 2011, the city of Copenhagen was hit by three devastating cloudbursts. Major roads and other infrastructure were flooded. The total damage from the worst and most destructive of the three events cost Copenhagen more than 800 million Euro.

Too Costly to Do Nothing
As a consequence of the disastrous 12 months with three massive cloudbursts, the municipality of Copenhagen decided it had to do something to protect the city from future damage. An initial economic analysis indicated that the cost of doing nothing to mitigate flooding would triple in 100 years due to climate change affecting the weather patterns.

The municipality of Copenhagen decided to implement a cloudburst master plan for the protection of the city against future cloudbursts. The plan was designed in collaboration with the consultancy COWI, and in 2013 it won the international acclaimed design award, Index:Award (INternational DEsign eXhibition). Another consultancy, Ramboll, contributed to the hydraulic basis of the plan by building a calibrated hydraulic model and carrying out initial flood calculations for the whole city, for Greater Copenhagen Utilities, HOFOR.

Protecting Copenhagen From Flooding
The cloudburst plan, when fully implemented 30 years from now, will protect the city of Copenhagen from a 100-year storm event (a storm that statistically will occur once every 100 years) and will have taken climate change into account as well. For the 100-year event, 10 centimeters of water is accepted on the streets in order to make the plan feasible. The plan aims at decoupling 30–40% of the stormwater from the combined sewer system. This is in order to level out the effects of climate change that are predicted to cause 40% more extreme rainfall over a hundred-year period.

Simplicity Rules
In a true Danish and Scandinavian spirit, developing a long-term plan and executing it is the key to successful and sustainable development of our cities. The cloudburst master plan is based on a few simple principles, the main being to keep the water on the surface and control it, rather than making large expensive pipes underground. The new cloudburst infrastructure will be used for separating rainwater from smaller events to take the load off the sewers and wastewater treatment plants. From a socioeconomic perspective, this has proved more feasible compared to conventional pipes, underground retention volumes, and a completely new separate system.

Cloudburst streets collect and transport the water away from the vulnerable areas. Retention streets are typically located a bit upstream from a low-lying vulnerable area and retain the water through the large storage volumes created. Adjacent to the cloudburst streets, areas with secondary streets will be transformed into green streets with swales or permeable pavements that retain the water in the area, and to some extent, infiltrate it, thus helping to recharge the groundwater aquifers. Central retention will be created in public spaces such as parks and parking zones. In areas where the water simply cannot be handled on terrain, large underground cloudburst tunnels up to 3 meters in diameter will be built instead of cloudburst streets.

The Vision Is Clear: Two Plus Two Has to Equal Five
The cloudburst master plan intends to create synergy for the city as a whole through visionary solutions. This is achieved by using water-sensitive, blue-green solutions to increase the overall livability of the city with the water on the terrain as a resource in the city space. The benefits are many, such as increased recreational value from upgrading of parks and meeting places, improved microclimate, and synergy with traffic planning, as well as contributing to making the city safe and accessible for the citizens.

More specifically, the concept for protecting the vulnerable low-lying areas is to retain the water in the higher-lying areas of the city and slowly release it when the peak of the storm has passed. In addition, the plan aims to create robust solutions that drain the low-lying areas. Where possible, the water should be handled locally.

Ramboll, in addition to the plans, has carried out an extensive hydrogeological assessment of the whole city to identify the effects of infiltration on the groundwater table.

Through integrated solutions, the plan will provide many benefits for the city aside from the flood protection, and thus support the life and well-being of the citizens.

Detailing the Vision in the Master Plan
The city of Copenhagen has been divided into eight areas, and a concretisation plan for each of those catchments has been developed. Ramboll has prepared four of the eight concretisation plans that detail the master plan with rich and detailed illustrations of how cloudburst streets, retention streets, and green streets can be designed and how these solutions support the overall goal of the city to increase liveability for its citizens.

The photo above is an example of multifunctional space on a cloudburst boulevard. The boulevard is wide enough to have a substantial retention volume to both store the water, and transport it away. Today the street is a traditional boulevard with a green strip in the middle. This design is quite common all over the world. The green strip is elevated a bit and has no other function than adding some green space to the city and providing space for citizens to walk their dogs. During cloudbursts the water is likely to run from the green area and onto the street. The whole road profile slopes toward the buildings and does nothing to prevent the cellars under the houses from flooding.

The vision that Ramboll created for this boulevard is to change the whole road profile to a V-shaped profile, creating a large retention volume in the lowered green area in the center of the profile. When it rains, the water can run away from the houses and the street into the green area. The capacity of the urban river created during cloudbursts can carry up to 3,300 cubic meters per second of water. During normal rain and dry weather, the lowered green strip can serve for recreational purposes for the citizens in the neighborhood as envisioned in the second photo. Central retention is also a key element in the cloudburst plan. One of the more radical suggestions is to transform one of Copenhagen’s three inner-city lakes, Saint Joergens Lake, into a beach park by lowering the water level in the lake. This creates a vast area for the collection of rainwater, while also improving the recreational value of the city. The alternative would be to construct a gigantic and extremely expensive cloudburst pipe to divert the expected half million cubic metres of water away. The recreational solutions aboveground will save approximately 134 million Euros, compared to the construction of an underground stormwater pipe.

Benefits From Making Blue-Green Solutions Exceed the Costs
A socioeconomic analysis was done for the master plan. The result was that the benefit from this approach, which focuses on livability and an overall improvement of the city, by far exceeds the costs of construction and maintenance. Even though the budget is 1.3 billion Euros spread over a 30-year investment period, the benefits from prevented flooding and reduced damages far exceed the investments. In 2015 several hundred projects were approved, and tendering has already commenced.

The concretisation plans help the city of Copenhagen maintain its position as the most livable city in the world, along with cities like Singapore. It is a showcase for the importance of long-term city planning, holistic and sustainable solutions, and an example to follow for many other cities in the world that are facing the same issues. Adapting to climate change in this way, as in Copenhagen, is good business for cities because the socioeconomic benefits are so abundant. 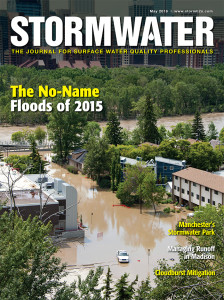 To access additional case studies and in-depth reporting, check out May edition of Stormwater.

You may need to log-in or subscribe to our magazine.