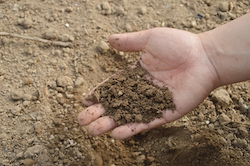 Image by Jing from Pixabay

A paper published on September 18 in the American Chemical Society journal Environmental Science and Technology reports that a relatively common soil bacterium removed 60% of PFAS in lab vials over 100 days of observation.

Per- and polyfluoroalkyl substances, or PFAS, have been used in products such as nonstick cookware, water-repellent coatings, some food packaging, and firefighting foam. The Environmental Protection Agency has said there is evidence that exposure to PFAS is harmful to human health and has opened research into the impact of these ubiquitous, bioaccumulative chemicals' impact on drinking water.

Because PFAS are made up of a chain of carbon and fluorine atoms, one of the strongest bonds in organic chemistry, the chemicals are incredibly hard to remove once in the environment. Now, however, researchers have identified bacteria from a New Jersey wetland that, surprisingly, can break carbon-fluorine bonds and degrade PFAS.

In previous work, Shan Huang and Peter Jaffé, researchers at Princeton University, isolated a bacterium, called Acidimicrobiaceae sp. A6 (A6), from the soil of New Jersey wetlands that could use iron in the soil to help break down ammonium, a pollutant found in sewage and fertilizer runoff, without any oxygen. Huang and Jaffé wondered if this reaction, called Feammox, could also help break down PFAS.

To find out, the researchers grew cultures of A6 in iron- and ammonium-rich medium and added one of two PFAS: perfluorooctanoic acid (PFOA) or perfluorooctane sulfonate (PFOS). The team found that A6 used the Feammox reaction to transfer electrons from ammonium or hydrogen gas to PFAS, removing the fluoride atoms and rendering the substances harmless. As a result, over a 100-day period, the microbes degraded up to 60% of the PFOA and 50% of the PFOS added to the cultures. These results indicate that under appropriate environmental conditions, A6 and the Feammox process could biodegrade PFAS in contaminated soil and groundwater, the researchers say.

Jaffe, the lead researcher and a professor of civil and environmental engineering at Princeton, said the researchers were very encouraged to see these bacteria substantially degrade the famously recalcitrant class of chemicals but cautioned that more work was needed before reaching a workable treatment.

"This is a proof of concept," said Jaffe. "We would like to get the removal higher and then go and test it in the field." Jaffe said the 100 day period was an arbitrary length selected for the experiment, and that longer incubations might result in more PFAS removal. By varying conditions in the reactor, the researchers hope to find the best conditions for PFAS removal.

A6 thrives in low oxygen conditions, which makes it particularly effective for soil and groundwater remediation and allows it to function without expensive aeration. However, these bacteria also require iron and acidic soil conditions. Jaffe said this could limit their deployment, but adjusting soil conditions could also allow the bacteria to function in areas that do not naturally meet these requirements. Noting previous work on ammonium reduction by A6 in soil columns, constructed wetlands, and the electrochemical reactors, Jaffe said the researchers believe this could also be done for PFAS remediation.