Considered one of the cleanest of the Great Lakes, the Lake is becoming increasingly vulnerable 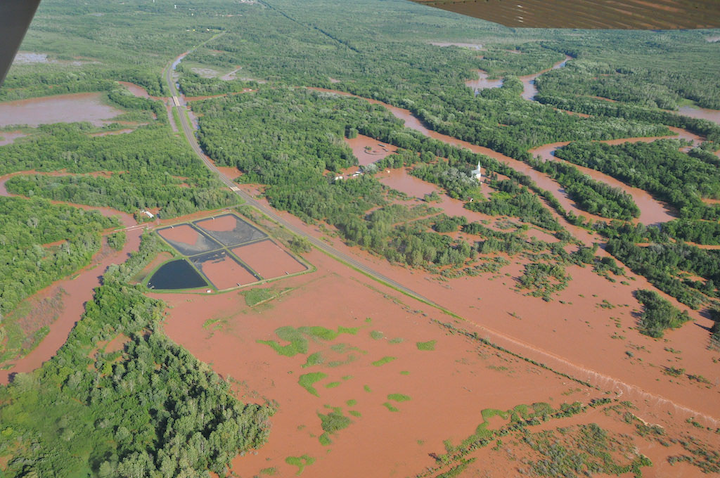 A 1000-year-storm event in 2016 inundated US Highway 2 and the Bad River Indian Reservation east of Ashland, WI. It’s one of three major storm events to hit the south shore of Lake Superior during a six-year period.
Wisconsin Energy Management

ASHLAND, WI, (December 10, 2019) — Lake Superior has long been considered the cleanest of the Great Lakes. But now the Lake is showing new signs of vulnerability, according to a paper released today. The paper was released by the Northland College Mary Griggs Burke Center for Freshwater Innovation.

A number of factors have led to this new vulnerability. The increased intensity of storms (most likely associated with climate change), historic land-use practices, and the south shore of Lake Superior's particularly erodible soils have had led to higher sedimentation rates, increased damage from infrastructure, and the first recorded widespread blue-green algae blooms in the lake in recent years.

Brenda Lafrancois, an aquatic ecologist for the Midwest Region of the National Park Service, reported that until 2012, the only reports of algal blooms in western Lake Superior were few and anecdotal.

The white paper is the result of a daylong summit at Northland College in September to discuss water quality concerns with the International Joint Commission, a bi-national organization charged with assessing water quality goals set out in the 1972 Great Lakes Water Quality Agreement.

The Burke Center convened a mix of experts from city and tribal governments, state and federal agencies, and academia to examine what is believed to be a “new normal” in water quality issues along the south shore of Lake Superior.

The region, spreading from Duluth, MN., to Houghton, MI, experienced 500-hundred-to-1,000-year storms in 2012, 2016, and 2018, resulting in flooding, blown-out bridges and culverts, sewer system overflows, agricultural runoff, and more than $150 million in damages.

“This new normal of extreme weather events is something we’re just starting to understand,” said Valerie Damstra, operations manager with the Burke Center.

The most noteworthy development in this storm-driven “new normal” is the appearance of potentially toxic blue-green algal blooms.

“We weren’t even thinking about superstorms and algal blooms in Lake Superior until a few years ago,” said Matt Hudson, associate director of the Burke Center. “Since 2012, we’ve been served a new reality and a new set of challenges.”

The 2012 bloom spread along parts of the south shore of Lake Superior in Wisconsin during warm July weather, just weeks after the 500-year-storm in Duluth. Then in 2018, following the 1,000-year-storm near Ashland, WI, the bloom stretched roughly 80 miles from Duluth to areas near Ashland.

The white paper concludes that the algal blooms, along with other storm-related water quality issues, will require more than a tweak of the 1972 Water Quality Agreement.

“We need to adapt and reassess the tools we have and use to protect water quality, not just in Lake Superior, but the whole Great Lakes system,” Hudson said.

For more information and to read the white paper, visit www.northland.edu/sustainability/mgbc/watersummit.