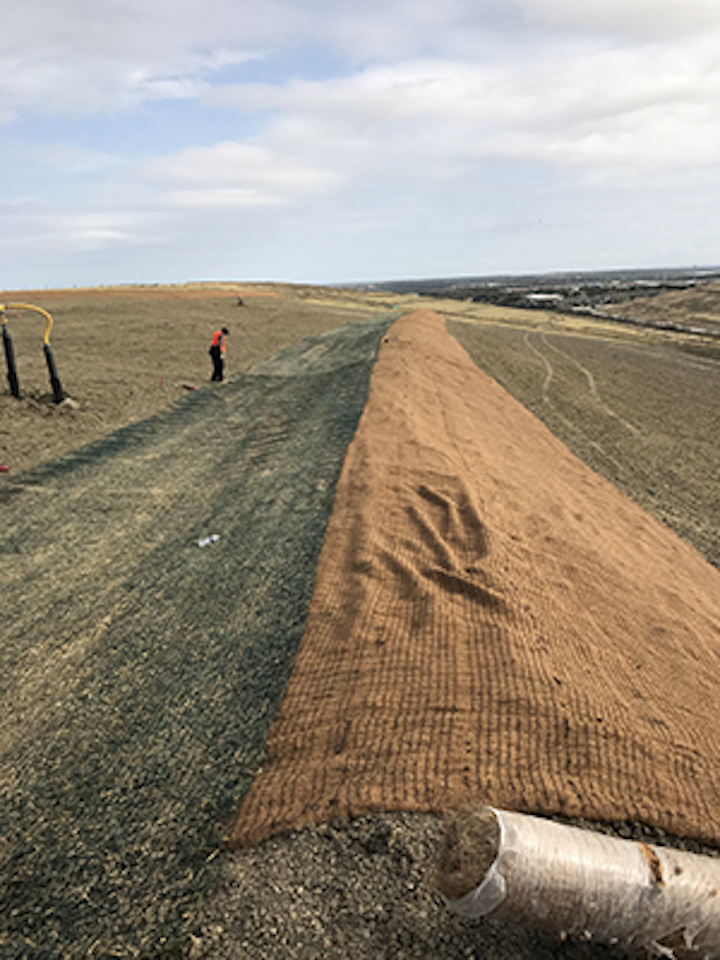 Blankets and mats offer a great deal of versatility, from quick and temporary solutions in erosion control projects to more permanent installations.

Choices include lightweight blankets and heavier turf reinforcement mats (TRMs) as well as hydraulically applied products such as bonded fiber matrix (BFM). They are sometimes used with other best management practices (BMPs) as the situation demands.

Blankets and mats are becoming a common solution of choice in such applications as landfill caps, as they aid in helping to prevent runoff from becoming an environmental challenge.

The company began the erosion control portion of the project in late November and worked into March 2017.

“The slopes are more than 500 to 600 feet long, and they needed the berms in between them to help the flow of water so it’s not just flowing straight down the slope,” notes Justin Hitchcock, president of JTEX.

A fully synthetic TRM was initially specified, but Joel Denofrio and Larry Hans at Innovative Soil Solutions, along with Hitchcock, worked to get the PS42 TRM from ECBVerdyol approved. A percentage of the fibers in this TRM are biodegradable, Hitchcock says.

“Some engineers are hesitant to approve permanent TRMs, not fully understanding that all testing and test data on the specifications is done on the non-degradable components of the TRMs,” points out Lauren Alaniz of ECBVerdyol.

“Therefore, the addition of the straw fibers to the TRM only improves the TRM by moderating the evapotranspiration rate and holding moisture better on the surface than a fully synthetic product would,” she adds.

Alaniz also notes that the biodegradable components of TRMs do not heat up to the same extent as fully synthetic mats do in hot climates such as found in central Texas. The cooler temperatures can assist with germination.

While the TRM was used on the portion of the slope where the water was expected to flow faster, Hitchcock also used coir blankets on the bottom portion of the backside of the slope, which served to cut costs in half, down from $200,000 to $100,000.

“Our biggest concern was trying to find what’s going to help the water flow the best through there and hold it without eroding the soil, and also where could we use a less-expensive product on the downflow side where water isn’t going to be flowing as much,” says Hitchcock.

“They originally wanted to go in and hydroseed it, and we put in an offer for that, but they wanted alternative methods, so we used the dry method of hay blowing, which turned out to be a lot less expensive for them, and it’s going to work the same,” he adds.

The slopes originally were 4:1, but Hitchcock suggested changing them to 5:1.

“I told them that would help in channeling the water in a different place so it’s not such a steep slope in between the two berms, and we were able to do the dry method of hay blowing instead,” he says.

In all, Hitchcock’s company installed more than 200,000 linear feet of both TRM and coir blankets.

Alaniz notes this project also marks the first time ECBVerdyol has made the product with a green fiber—which was a requirement for the job—instead of its usual tan, natural-colored fiber.

“The green color was written in as a requirement on the plans and is often done so to make it easy to visually inspect onsite to ensure a permanent blanket is used in the correct spots,” she says of the landfill application.

“Generally we use tan fibers, as they are less visible once germination has started, as well as not heating up as much under extreme heat conditions as we get in central Texas,” she adds. “In this case, even though we used the darker green fibers, the addition of the straw fibers in the PS42 served to reduce the mat from heating up as much as it would if it had been fully synthetic—a real benefit in these climatic conditions.”

The company provides a full line of geosynthetics, including Recyclex TRM from American Excelsior. Recyclex TRM and Recyclex TRM-V are made from 100% recycled post-consumer goods.

Coleman says the choice was made to go with Recyclex TRM because “When we got the calculations of the acreage of the cap itself, the square footage of drainage area, and how they wanted to build the cap, it just came down to a permissible flow situation.”

The steepest flumes were about 4%, says Coleman. After its installation, the Recyclex TRM was seeded and fertilized, creating vegetated lined channels that drain the entire cap, he adds.

While any other conventional heavy-duty degradable type of mat such as a coir blanket might have held up for a certain period of time, “the permissible shear stresses are as such that when it biodegraded—whether it be two to four years down the road—they would start getting real erosion in their flumes, so they needed something permanent,” says Coleman.

“We used 26,000 square yards of Recyclex turf reinforcement mat for all of the waterways and flumes to drain the cap,” he says. “The landfill operator appreciated that it was 100% recycled material.”

Since its installation, the Recyclex TRM has been “performing excellently, with no complaints,” notes Coleman.

An existing stormwater mitigation pond on the project had to be modified to make it larger. Additionally, construction crews had to reconstruct 40-foot slopes on the existing pond because poor soils were causing them to fail, notes Levi Lloyd, operations manager for Dixie Construction Co.

The Maryland-based Dixie Construction provides turnkey construction services and was asked by several general contractors to put in bids for the project, says Lloyd.

In an effort to determine how to rectify the situation with the failing slopes, a meeting ensued that involved the property owners; Hillis-Carnes Engineering Associates, which provided the geotechnical engineering for the site; Baltimore County erosion and sediment control specialists; and Matis Warfield, which provided design engineering services.

“During the meeting, it was determined that we would have to excavate and undercut the slopes to install underdrains to capture the water that was leaching out of the slopes, in addition to using some type of erosion control matting that would allow seed germination and get a good stand of grass on,” says Lloyd. “Based on the engineer doing his research, and with the help of Bob Hagy of ACF Environmental, the recommendation was made by the geotechnical engineer to use that type of product.”

In the apartment construction project, mitigating the slope challenges also enabled the expansion of the site footprint for construction of the housing units and parking spots, says Hagy.

“With the stormwater pond at the bottom of the steep slope, part of the design was to put the East Coast ECP-2 turf reinforcement matting on the face of the slope to stabilize the surface,” says Hagy, who also helped choose the appropriate solution and was onsite throughout the project to offer guidance.

Crews had to build the slope from the bottom up, bringing in fill to steepen it, Lloyd says.

Lloyd notes that while the project as a whole was “business as usual,” having to reconstruct the slope was “pretty challenging. It’s not something we come across every day. 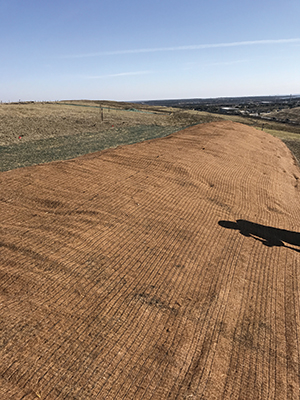 “The slope was more than 40 feet tall and it was a 3:1. It’s very hard to construct with equipment on a 3:1 slope, so we had to bench ourselves down and construct the slope on the way back up. When we got down to the bottom, we had to undercut and recompact the material back in there as we were bringing up the 3:1 slope and installing the matting on the slopes as we were coming up.”

Credit: JTEX ContractingThe soils present were a sandy, silty material, and as Dixie Construction crews started to undercut the slope, they encountered water running down the slope, causing it to fail, notes Lloyd.

“The geotechnical engineering firm would not allow us to reutilize it in the slope for future stabilization,” says Lloyd. “They felt the material that was there would fail, so we had to remove that material, import suitable material, and recompact it prior to installing the matting.”

Additionally, engineers from Hillis-Carnes directed crews from Dixie Construction to install underdrains to capture the water and then remove the unsuitable soils and install a clay-type material that would stay in place and withstand the slope, says Lloyd.

Lloyd says when his company is working on a temporary stabilization project, crews will sometimes use a biodegradable straw matting to control erosion until they can get germination for a good stand of grass. “But on this slope, the matting we put down was to be a permanent stabilization matting,” he notes.

Some 6,800 square yards of ECP-2 were installed on the project in a three- to four-week period throughout October and November by crews from Dixie Construction, says Hagy, adding he’s done several similar slopes with the company for previous projects.