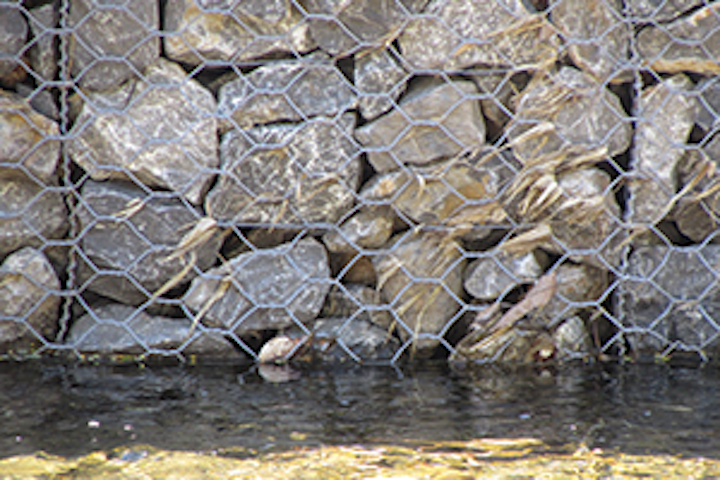 As streambanks erode over time, erosion control specialists are called in to mitigate the problem with approaches that may include hard armor or a softer approach, such as bioengineering. The long-term goal—as well as costs, function, permeability, flexibility, and aesthetics—often dictate the approach.

Protecting Coral in Guánica Bay
One project in Puerto Rico called for soft techniques. In Guánica, the Maccaferri company has provided supplies and expertise on a riverbank protection project that, if proven successful, will be used as a template for similar projects throughout the United States.

The Río Loco Watershed Project is a multiagency endeavor that supports a portion of the Guánica Bay/Rio Loco Watershed as part of the efforts of the US Coral Reef Task Force.

Coral reefs have been impaired by sediment coming from the Loco River Basin. Since the beginning of the ­project, NRCS has committed to protect the coral reefs in the Guánica Bay, designing conservation practices to be applied in the agricultural lands of the Guánica Valley and in three segments of the Loco River to prevent erosion, according to Edwin Almodóvar, director of USDA NRCS Caribbean.

One of the three Las Latas segments involves a streambank stabilization project on the Loco River, Las Latas Sector, in Guánica.

The goal of the project is to stop erosion at the site and reduce sediment flowing into the Guánica Bay. The design includes structural protection of the riverbank with gabions and stream barbs. Bioengineering practices were implemented behind the gabions wall as part of the treatment.

The focus of the project is protecting a slope along the river that is affected by water volumes during heavy rain events.

“The river has a dam, and when the dam gets overflowed, which happens most likely three times a year, the community gets flooded,” notes Alberto Blasini, Maccaferri’s territory manager for the West Indies, Caribbean, Puerto Rico, and US Virgin Islands. “This wall will protect two things: the community and a USDA vegetable farm.”

Crews installed a gabion wall made from Green Gabions vegetated with the plants of the area to protect the area’s fauna, says Blasini.

The use of Green Gabions on the top row of the wall was a first for NRCS in Puerto Rico. The approach was designed to help secure the structural treatments and also provide for enhanced aesthetics as well as some habitat ­benefits, notes Almodóvar.

Because of the importance of this project for the agencies and the nearby community, Maccaferri provided training on how to install both regular gabions and Green Gabions to the contractor personnel, the Suroeste SWCD personnel, and NRCS personnel in the area.

More than 300 units of Maccaferri’s Green Gabions were combined with more than 500 PVC-coated gabions, five 500-square-yard rolls of nonwoven geotextiles, 80 rolls of coir erosion control blankets, more than 3,000 MacTies, 2,500 cubic meters of solid rock, and Reno Mattresses, notes Blasini. The total cost of materials was $108,000. They were sourced from Maccaferri’s Puerto Rico operations.

Maccaferri Green Gabions are modular gabion units used for streambank stabilization, restoration, and erosion protection. They are designed for use with soil bioengineering techniques such as live staking, brush layering, and rooted plants.

The Green Gabion is a basket manufactured from heavily galvanized and polymer-coated double-twisted hexagonal woven steel wire mesh lined with a 100% coir blanket. The unit is filled in place with gabion stone, and the voids between the stones are filled with quality topsoil before the unit is closed. The topsoil allows plant establishment, and the stone fill provides a tough skeleton to the system.

The project began in August 2015. USDA engineers have visited the site to view the installation process and the results on the riverbank, says Blasini.

The USDA favored the Green Gabions. “When they were looking for solutions, they didn’t want to work with concrete, as the appearance of the area would be severely affected,” says Blasini.

One challenge associated with the project was meeting government requirements for local employees to do the work, says Blasini, who also performed inspections. The project was constructed by V. Berrios Construction.

“They had no experience with gabion installation,” he says of the local crews. “We had to give them trainings and seminars on the job site to have them technically knowledgeable to install the gabions. We went there over three times. Finally, we had what we and the federal government were looking for.”

The project was the highlight of a US Coral Reef Task Force meeting in October 2015, which included a field trip to the sites in Guánica Bay, including Las Latas bioengineering site.

Restoring a Shoreline
A vegetated approach also was the preferred erosion control method on a project for the Indianapolis (IN) Department of Public Works. The department sought a solution for a lake edge restoration where a culvert had washed out, wanting to rebuild the area back to grade and install native plants. 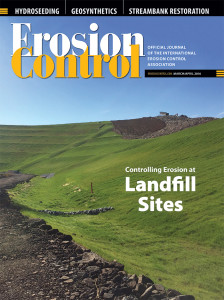 To continue reading the full article, which includes additional case studies and in-depth reporting, check out the March/April edition of Erosion Control. Please click here. You may need to log-in or subscribe to our magazine.