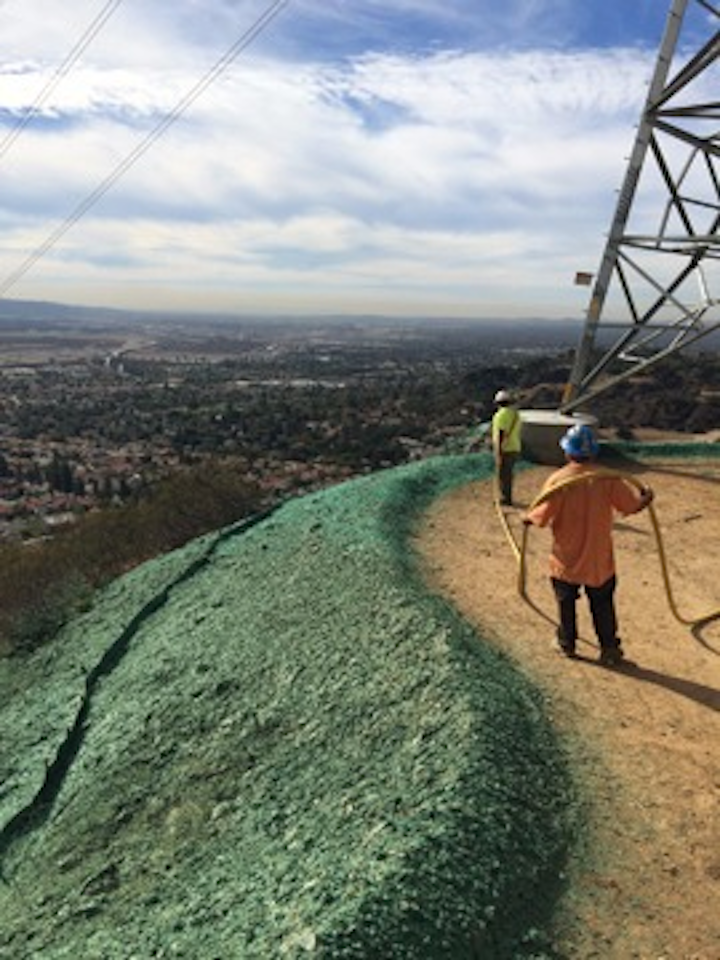 James Construction of Escondido, CA, is serving as the hydroseeding contractor for Southern California Edison (SCE) on its Tehachapi Renewable Transmission Project (TRTP) projects located in the Angeles National Forest. Warren James, the company president, notes that although his company has done major projects before, this project is being executed in a unique fashion; he credits SCE and PAR Electric for being able to merge the construction and restoration contractors’ tasks together to create a seamless transition into restoration activities.

James Construction is working on three links of four segments of the large transmission project: segments 6, 7, 8, and 11. Seeding efforts on segments 7 and 8 have entailed the company working with the restoration contractor in seeding for its needs.

“It’s the first time we’ve done that,” notes James. “Typically what happens is we’ll come through and stabilize for the construction contractor with SWPPP seeds, but what’s been happening is there’s been a break in the work where the restoration contractor has to come back and do some sort of a scarification process to put down their specialty seeds.”

For segments 7 and 8, the PAR Electric team came up with the idea to join the two tasks, putting down restoration seed during the required stabilization for the construction contractor.

Overlap can be an issue in a contract, he notes. “The way it worked in the past is the construction contractor was only required to stabilize the site,” points out James. “What we would do is come stabilize the site with hydromulch, jute net, or whatever would be required. The problem is that the restoration contractor always has special timing. Usually it’s going to be the winter months.”

Every project on which James has worked is finished after winter, he says.

“There would be that gap in time from the end of winter all the way through summer until the next planting season when the sites are exposed,” he says. “That creates a stormwater liability for the utility, because the prime grading contractor would be off the hook, but then [the utility] is going to be on the hook for the stormwater compliance until the restoration contractor could even start. Then the restoration contractor would come back and essentially would have to pull up what we put down in order to get a clean slate to start their planting process.”

In this project, all involved parties came together on the last few links, acknowledging that was not the best approach, says James. “We were not doing ourselves any favors in the long run,” he adds.

The team from PAR Electric asked James, because his company was already going to be out at the site stabilizing and hydromulching, if he would be opposed to working with the restoration contractor in putting their seed in with his mix at their direction, thus combining the hydroseeding work with the stabilization process..

“I said I was absolutely not opposed to that idea,” says James. “It’s a jump start for the restoration contractor. They don’t have to worry about reseeding and scarifying what we’ve already done.

“It’s worked pretty well,” he adds. “It’s the first time I’ve worked in conjunction with a restoration contractor, so it’s a new experience for me and our company, but it’s been a very enlightening experience.”

Given California’s drought, the right seed mix was critical to make the hydroseeding project successful. James’ company is working with six different seed mixes for the restoration areas and one general SWPPP mix for everything else. The seeds—which are native plant seed collected within the region—are sourced from S & S Seeds.

James’ company specializes in hydroseeding remote and hard-to-access sites, which was a benefit to the project. The seed was applied with Bowie Hydro-Mulchers.

“A lot of transmission sites are remote,” points out James. “You couldn’t get a 3,000- or 4,000-gallon hydroseeding truck to probably 80 to 90% of the areas that we typically would have to stabilize. We either get there by helicopter or their extremely tight right-of-way roads where we put a small Hydro-Mulcher in the back of a 4-by-4 pickup and drive out to the sites.”

The company uses a standard application rate to apply the hydroseeding mix. Rates are calculated based on how many pounds per acre are needed for stormwater management purposes. W. James Construction then creates a base mix.

James says some 1,500 pounds of seed have been used on the links for the work on segments 7 and 8, which he says comprises an estimated 75–100 acres.

Contingency seed is ordered up front, says James. For example, if a site calls for 10 pounds, 12 pounds are ordered to provide a 2-pound buffer.

“The restoration contractor has the ability to dig into the contingency seed if they want extra square footage sprayed at the site,” says James. “Every site is different. It’s difficult in these environments. We don’t necessarily know what we’re getting into until we’re at the site. The acreage fluctuates and it’s hard to anticipate.”