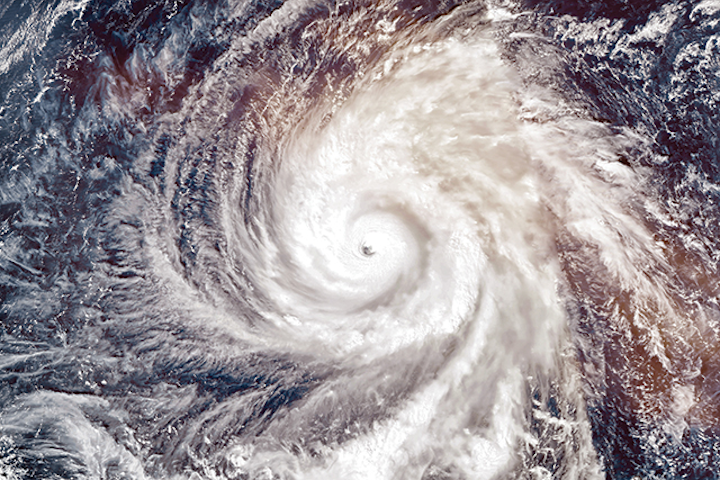 Extreme weather events, wildfires, aging infrastructure, new construction, and government work in response to tightening regulations are on the radar as erosion and sediment control experts position their businesses for what services will be needed in 2020 and beyond.

“Tighter regulations are going to be on the way—there’s talk about redoing a lot of the requirements on a lot of projects coming down from the EPA,” says Selby. “It’s probably going to broaden the scope of work as far as what we’re going to be needing to do.”

Beth McLaughlin is a stormwater consultant with McLaughlin Consulting in Durham, NC, who has been in the erosion and sediment control industry as a state and local level regulator and as a consultant working with government organizations to comply with the NPDES Phase II construction job permit.

She notes that regulations are going to get more restrictive or more specific.

“I’m in North Carolina and we have had a layered stormwater and water quality protection program in place for many years,” she says. “Those regulations are ramping up a little bit. I envision the same is going to happen in the other states in the Southeast in particular.

“I’ve heard interest from state and federal regulators about trash TMDLs. We’ve seen that primarily on the West Coast, but it’s starting to creep over onto the East Coast.”

Nutrient TMDLs such areas found in North Carolina, Florida, and Maryland are being developed by state regulators who are not in coastal states, says McLaughlin.

“The next generation of regulations is going to ramp up the expectation,” she says “We’ve got to be more creative in the way we are designing and constructing in the field.”

McLaughlin says contractors will need to look at the projects holistically and provide more services.

“It’s not just initial clearing, grading, and putting in initial construction, erosion, and sediment control measures but then also being able to install and go into long-term maintenance on post-construction BMPs,” she says.

That will require contractors to understand how development impacts soils, runoff, and streams as well as understanding plants, soils, infiltration, and geotechnical factors, McLaughlin adds.

“C and D type soils don’t have the same infiltration rates and stormwater benefit that A and type soils provide,” she says. “If I’m looking long-term, I want to protect those soils so I get more infiltration and less runoff.”

Minimizing impact is another key skill.

“Minimize the area you actually have to disturb to do the development,” she says. “Think about it from an ecological perspective. Getting a perspective on soils and plants, understanding how to look at a piece of land and help the developer determine the best areas to develop and the best areas to leave alone is an expertise I’d want to have in my toolbox going forward if I was a contractor.”

Creating resiliency is going to be a key issue in 2020 and beyond, says Mike Hardin, Ph.D., PE, a senior engineer with Geosyntec Consultants. He works with erosion and sediment control as it relates to his specialty of stormwater quality design and evaluation, with a focus on Florida.

Many of the engineered systems in place could be under-designed for the resulting flow types and water levels, says Hardin.

Corroded and leaking aging infrastructure can result in surface erosion as soil washes away every time it rains through degraded pipes, says Hardin.

Hardin points out there also are erosion-related water quality impacts.

“Particularly in Florida, we have a lot of water bodies with nutrient pollution issues,” he says. “A lot of the most erodible soils also tend to have the most amount of nutrients associated with it.

“When we talk about trying to prevent harmful algal blooms in Lake Okeechobee and other surface water bodies within the state, many of those can be exacerbated by erosion issues within the watershed.”

Coastal erosion concerns impact a significant number of US residents and the stakes are high. According to the US Census Bureau, about 94.7 million people—or 29.1% of the US population—lived in the 255 coastline counties in 2017. The Atlantic was the most populous of the coastline regions with about 44.4 million people.

Although the Gulf of Mexico is the smallest of the coastline regions, it also is the fastest-growing, having added more than three million people between 2000 and 2017. In that time frame, the 13 hurricanes that made landfall on the Atlantic and Gulf of Mexico coasts caused more than $600 billion in damage in the US. 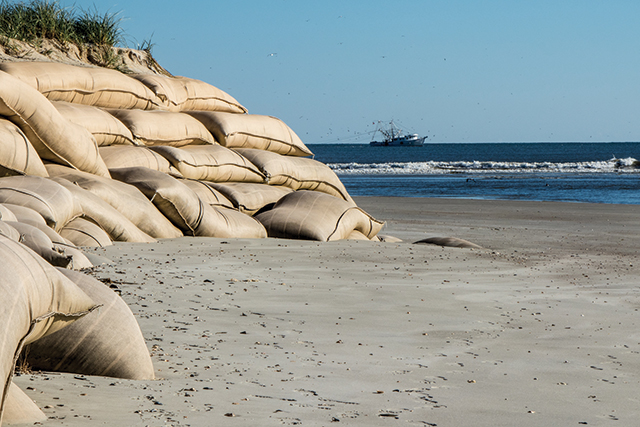 Annually, coastal counties produce more than $8.3 trillion in goods and services, employ 55.8 million people, and pay $3.4 trillion in wages, according to 2015 statistics from the National Oceanic and Atmospheric Administration Office of Coastal Management.

A storm surge of 23 feet has the ability to inundate 67% of interstates, 57% of arterials, almost half of rail miles, 29 airports, and virtually all ports in the Gulf Coast area, according to NOAA.

Coastal erosion as the result of extreme weather events brings forth the issue of whether it is feasible to keep building and rebuilding along the coast, notes Hardin.

To respond to physical beach erosion, some local municipalities are engaged in beach re-nourishment projects to put sand back on the beach in an effort to stabilize it against rising waters, Hardin points out.

There are areas in South Carolina where a few more feet are being added to a sea wall built in the 1800s, says Hardin.

“All of our stormwater is piped right out to the ocean, which is a direct conduit for that water to come rushing right into other low-lying areas that are connected,” says ­Hardin. “There might be a land barrier between there, but it’s directly connected via large drainage pipe. That where you get sunny day flooding events which can result in ­erosion problems in areas where they are not expecting water to be bubbling up.”

Continued mitigation will include the use of more flap gates on pipes and building up sea walls, says Hardin.

“We’re going to have to look at different techniques for armoring our shores and coastal communities to protect people from the rising tides,” says Hardin. “That’s going to be an investment into the infrastructure of these communities.

“We may get to the point where we’re out of things to do. We can only raise the road so much. I don’t know that we’re going to go through an effort to raise everybody’s houses and all of the other critical infrastructure that we rely on daily.”

Selby also is seeing an increase in post-fire projects under the US Fish and Wildlife Service realm.

Selby also anticipates a directional shift in work as a result of a US Army Corps of Engineers project in which $1.5 ­billion has been allocated for the design and construction of the American River Common Features Project to provide 200-year level of protection for parts of Sutter and Sacramento counties as part of an overall hurricane disaster recovery and proactive flood control project effort.

“We’re starting to see it in new levee projects,” says Selby. “Sacramento is number two on the map after New Orleans for possible flooding, so with things like the Oroville Dam almost rupturing—and we were involved with that and other leaks and breaks in levees—we’re putting in an effort toward that style of work.”

In reaction to an eventual slowdown of California’s massive housing boom, Selby says his company is digging its heels deeper into estimating multi-year, state- and federal-driven projects like highway work.

“Those are three-year contracts,” he says. “We’ll have a good contract backlog on the books when the housing market starts to slow.”

In looking ahead to how he will position his business to supply needed services, Selby is noting a problem in the erosion control industry with some manufacturers keeping up with engine requirements.

“Everything that’s not a Tier 4 engine is basically on a clock now,” he says.

Anticipating needs nearly a year in advance is another challenge with which erosion control specialists must contend, says Selby.

“It takes about seven to nine months from a time we order a new piece of equipment to the time we receive it,” he says, adding that presents challenges in dovetailing equipment needs with the timeline of job bids.

Alternately, Selby notes that drones and GPS have moved the industry in the “biggest leap forward” to date.

“Before, you had to rent a helicopter or fly a plane for a project,” he says. “Now, we’re droning things for pennies. The GPS mapping has improved.”

“We have to have good, reliable data so we know that we are putting our resources in the areas where it’s needed or point us in directions of an area that’s going to have problems. We don’t want to wait for a problem to happen somewhere. It’s better to be proactive.”

“We’re able to identify areas where the system is deficient,” he adds. “A lot of times if you have deficient stormwater infrastructure, that’s going to result in erosion and sedimentation issues.”

Case in point: an open cut ditch that’s exceeding its ­capacity may result in erosion on the sides or top of the ditch or having full blowouts, says Hardin.

“People are doing IDF (intensity, duration, frequency) curves for future conditions based on the large-scale global climate models,” says Hardin. “They’re doing scaled-down versions, using them to predict what a 100-year rainfall event might look like in the future.

“We can model that with our models to get an idea of how is that going to impact the drainage system in an area or a region and help us to identify the soft spots or the areas where we’re going to be the most vulnerable where we can look at implementing improvement projects to help make those areas more resilient to those future conditions.”

“We build some hard armoring structure that’s going to work good but at some point, it’s going to start degrading,” he says. “If you incorporate natural processes and vegetative processes in your design, those plants grow and get stronger with time.

“Your design becomes stronger and more resilient when you’re able to incorporate vegetation into your armoring techniques and that’s going to be critical moving forward as well. There’s got to be some blend between our gray infrastructure and our green infrastructure. I think we do a fairly good job at this, but we need to do more. We look to nature and see how the experts have been doing it and how we can incorporate some of those processes and practices into our design so we’re able to produce the most resilient design possible.” 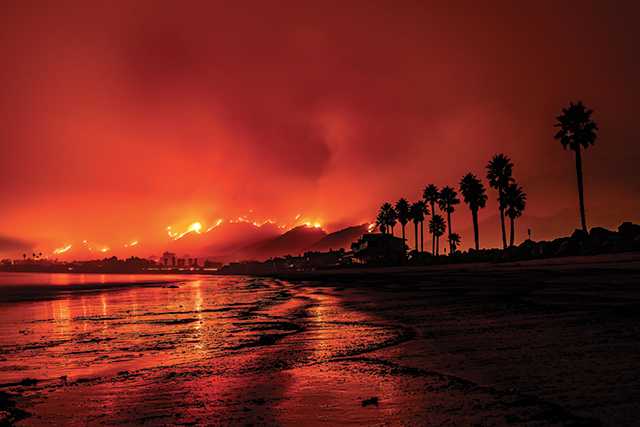 “Regulators don’t always understand the unintended consequences of their regulations,” she says. “As prac­titioners, if we can stay abreast of what’s getting ready to come out, we can help craft regulations that are doable on the ground.”