The settlement between Puget Soundkeeper and LRI Landfill requires LRI pay $734,000 to clean up areas impacted by illegal discharges of landfill fluid, oils, and other contaminants. 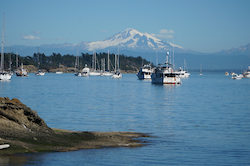 Image by awsloley from Pixabay

SEATTLE, WA — A settlement was reached on December 10, 2019, between Puget Soundkeeper and LRI Landfill to resolve a federal Clean Water Act case filed in September 2017. LRI Landfill is a 169-acre, privately-owned non-hazardous landfill within the Nisqually River watershed. LRI is required to pay $734,000 to fund third-party environmental grants in the vicinity of the Nisqually River watershed and other areas impacted by illegal discharges of landfill fluid, oils, and other contaminants caused by LRI's failure to meet both the Industrial and Construction Stormwater Permit standards.

Since the start of its construction in 1996, LRI has discharged stormwater into wetlands that lead to Muck Creek (also known as South Creek)—Nisqually River tributaries providing critical habitat for chum salmon, steelhead trout, and sea-run cutthroat trout.

Documented by the Washington Department of Ecology and Tacoma Pierce County Health Department, LRI’s list of violations also include failure to follow stormwater sampling guidelines; high levels of toxic chemicals such as copper, zinc, lead, and polychlorinated biphenyls (PCBs) found in their discharged stormwater; and failure to install technological improvements to effectively control their water pollution.

The settlement reached with Puget Soundkeeper also requires LRI to comply fully with all clean water permits going forward; to install site improvements to prevent future leachate leaks; to install an advanced stormwater treatment system for both their industrial and construction stormwater discharge and upgrade the system if sampling data shows it’s needed; to improve handling of auto shredder residue to prevent it from becoming a pollution source; and to share permit compliance reports with Puget Soundkeeper to track changes outlined in the settlement.  For a full list of settlement outcomes, view the Consent Decree.

“LRI Landfill has a long and complicated history of disappointing community members with its poor pollution track record—and we hope that today marks a turning point for this facility,” said Katelyn Kinn, Puget Soundkeeper Staff Attorney. “Moving forward, LRI has the opportunity to work to become a better neighbor. We look forward to tracking their progress, and holding them accountable.”

Puget Soundkeeper is an environmental non-profit whose mission is to protect and preserve the waters of Puget Sound. Since 1984, Soundkeeper has filed over 200 legal actions and all funds from successful settlements go to restoring polluted waterways in the region through the Puget Sound Stewardship & Mitigation Fund.