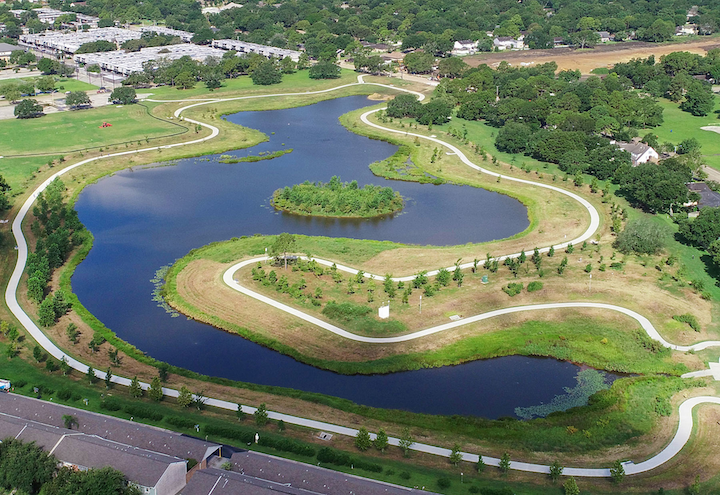 HOUSTON (November 22, 2019) — The civil engineering firm Lockwood, Andrews & Newnam has been awarded a gold medal in the water resources category by the American Council of Engineering Companies (ACEC) Texas for its work on the first phase of the Clear Lake flood control project Harris County. The award will be presented during the ACEC Texas Engineering Excellence Awards Gala in Houston on March 30, 2020.

The Engineering Excellence Awards Competition has been held by the American Council of Engineering Companies of Texas since 1975 to honor and recognize outstanding achievements within the engineering community. A panel of judges from around the state select projects based on innovation, future value to the engineering profession, social and economic considerations, complexity, and exceeding the client’s needs.

The flood control project, named Exploration Green in honor of the community’s local exploration legacy and its proximity to Johnson Space Center, is transforming a former 178-acre golf course into five massive detention ponds that can each hold 100 million gallons of stormwater (the equivalent of 750 Olympic-sized swimming pools). In addition, Exploration Green will also serve as a nature park comprising 105 acres of natural habitat with wetlands and native grassland areas, 12 miles of hike-and-bike trails, two athletic fields, and a number of other amenities. The first phase of the project, which was completed in April 2018, includes a 23.7-acre detention pond, 15.2 acres of natural habitat with wetlands, and 1.25 miles of hike-and-bike trails.

In August 2017, Hurricane Harvey made landfall and dumped an estimated 45 inches of rainfall on the Clear Lake area and even more in some surrounding neighborhoods. Although only 80% of the Phase 1 pond was excavated at the time of the hurricane, it helped detain 100 million gallons of water, protecting at least 150 homes from flooding. Ultimately, Exploration Green will protect 2,000 to 3,000 homes.

“Communities throughout Texas are looking for ways to mitigate flooding events like Hurricane Harvey,” says Wayne Swafford, PE, LAN’s president. “Exploration Green is transforming Clear Lake from a flood-prone community into one of the most flood-resilient communities in Texas. In addition, it is creating a healthy, sustainable neighborhood for its residents.”

Economically the project protects homes from flooding, increases home values and decreases flood insurance costs. Located in an area that was in economic decline, the project has already begun to revitalize home values. Anecdotal evidence from area realtors indicates that homes abutting the project have increased in value by 50 to 100% percent over the past three years.

Situated in the center of the Clear Lake community, this project provides easy green space and trail access for strolling, walking, jogging or biking. Nearly 70% of the 40,000 people living in the direct Clear Lake area will be within walking distance of Exploration Green, and the remaining 30% will be less than a mile from one of the sections.

Finally, the wetlands and native trees, grasses, and wildflowers have provided an attractive habitat for fish, birds, and other wildlife. iNaturalist reports indicate that nearly 400 species of birds, plants, insects, and reptiles have been verified at Exploration Green.